What You Are in the Dark 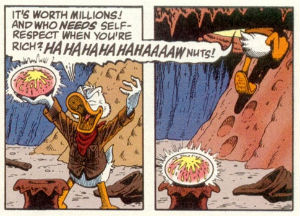 Sometimes, you surprise yourself.
"Character is what you are in the dark."
— Attr. to Dwight L. Moody (American Evangelist, 1837–1899)
Advertisement:

The Hero is alone, except, perhaps, for the villain. No one whose opinion they care about — possibly no one at all — will ever need to know what they do next, and they know it. And there is a useful but corrupt act that they could commit, reaping the benefit without anyone ever knowing. If they do not do it, the consequences can be severe, even deadly. If the villain is there, they are urging the hero to do it, which possibly involves cleaning up any possible witnesses. If the hero is alone but we still need some exposition dialogue to understand what's going on, they may discuss it with their Good Angel, Bad Angel. Very likely, they are at their Darkest Hour, even on the verge of the Despair Event Horizon.

The Stock Phrase is usually something like "No one will ever know." It can taunt them with the futility of their heroism (perhaps even telling them that they will die alone, unmourned, with no one attending their funeral, unremembered), or tempt them with the rewards of villainy, even telling our hero that the heroic act will be interpreted as villainy, and vice versa. A more foolish and friendly villain may urge it's Not Cheating Unless You Get Caught.

Well, the audience finds out whether they really are The Hero.

Usually they are, because doing the right thing in the face of great temptation is a mark of great heroism, whereas doing the wrong is only bog standard, baseline villainy. When the wrong path is taken, this is usually the lead to more impressively villainous acts. Occasionally, it is to prove Can't Get Away with Nuthin': a character loots a corpse, only to discover it can be identified.

Particularly hard for the Glory Seeker. May prove to be a Secret Test of Character. May also prove a great shock to a villain who was convinced they were a Slave to PR and not so different.

If a villain is urging that no one will ever know, three responses are possible, depending on the hero's character:

This can apply in cases where the credit will quickly be misappropriated, as when working for the Glory Hound, or when a Fake Ultimate Hero is present.

The usual Aesop of this trope revolves around the idea that anyone can do the right thing when all the attention is placed on them and it would be inconvenient not to do so, but it takes real strength of character — and heroism — to do the heroic thing when no one is watching and there's nothing to lose. This may carry a cynical message that most humans aren't bastards only when Big Brother Is Watching.

Super-Trope of Silent Scapegoat. Antonym of Photo Op with the Dog. Often a prerequisite for a We Can Rule Together offer made to a hero. Compare Invisible Jerkass, Dude, Where's My Reward?, Strike Me Down with All of Your Hatred!, G.I.F.T. See also The Greatest Story Never Told and Zero-Approval Gambit. See Shoot the Dog for when there are arguments for the morality of both actions. See Hidden Heart of Gold for when a Jerkass turns out to be a nice person on the inside. May involve The Corrupter. This test of character always reveals what is Beneath the Mask. If a character erroneously believes that nobody will know what they're doing, they can find themself at the wrong end of an Engineered Public Confession (if the situation was set up deliberately) or Is This Thing Still On? (broadcasting a private moment by accident) situation.

If you are looking for the blog by the same title that is part of The Slender Man Mythos, go here.

Compare and contrast the villainous version; the villain has achieved everything they set out to do, has wealth and power beyond their imagination, and is perhaps even ready to settle down with someone they genuinely and unselfishly love. Then they realize that their actions cross a line — believing utterly that what they have done is unforgivable and a Heel–Face Turn probably won't even work — and they give it all up to fight for Good anyway. Also see Undercover When Alone.

All I Have To Do... Is Nothing

Due to being emotionally and physically abused constantly by Suguha, Kirito contemplates on simply letting his younger sister choke to death on a blueberry muffin.

Alternative Title(s): No One Will Ever Know

All I Have To Do... Is Nothing

Due to being emotionally and physically abused constantly by Suguha, Kirito contemplates on simply letting his younger sister choke to death on a blueberry muffin.