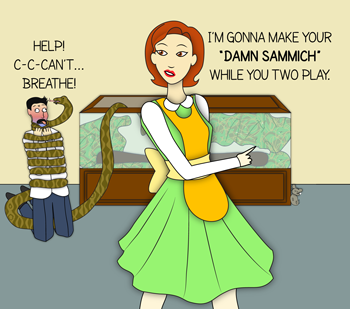 "I watched Jane die. I was there, and I watched her die. I watched her overdose and choke to death. I could have saved her, but I didn't."
— Walter White, Breaking Bad
Advertisement:

A convenient way to deal with someone you want dead is to simply not save their life when a situation arises in which their death is inevitable.

Killing is messy. You have to deal with those pesky murder charges, or go to the effort of engineering a convenient "accident" or "suicide" to avert suspicion, or clean up the crime scene to hide your involvement. But as fate would have it, if your foe winds up in a fatal position and you are their only means of survival, all you have to do to kill them... is nothing at all.

In Real Life, this concept is called the duty to rescue.

According to The Other Wiki, the failure to offer help for those in need isn't usually considered a crime (because of the can of worms that opens when you punish someone for "not doing anything"), but there are countries where people are obligated by the law to come to the aid of those in life peril. In France for example, abandoning a helpless person can earn you a prison sentence of up to five years. On the other hand, you cannot be prosecuted for a bad first aid, precisely for the reason to prompt people to help those in need no matter what, unless it would endanger their own lives as well. Of course, an exception is made for on-duty emergency workers, law enforcement, and military personnel, where failure to act is to violate your duty. It can also be your duty because of your relationship to the person: parents have a duty to rescue their minor children. Failing to act is also generally punishable if you're in some way responsible for creating the dangerous situation in the first place.

Compare Do with Him as You Will, Make It Look Like an Accident, Never Suicide, and Throw 'Em to the Wolves. Contrast Accidental Murder and Save the Villain. If the victim is murdered actively by a character and another character does not intervene, it's a case of Accomplice by Inaction or Betrayal by Inaction depending on the case. Contrast/Compare Failure-to-Save Murder where someone is held responsible for a death because they tried and failed to prevent it, and Bystander Syndrome when people in general don't help the victim. Is often the Face–Heel Turn for a character. Most of the time it is not a Moral Event Horizon however unless the perpetrator contributes actively enough into this to be considered indirectly culpable. This is often a favored tactic of the Technical Pacifist. Contrast Save the Jerk, where the hero might not like the person, but still goes out of their way to save them.