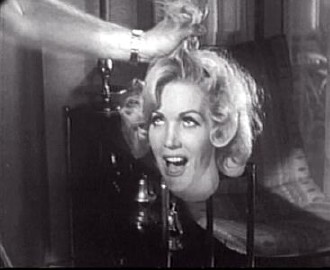 Guess he really got a-head!
Advertisement:

Jazz pianist Tom Stewart is engaged to rich girl Meg. Unfortunately for him, his possessive former flame Vi shows up intending to disrupt the nuptials. Fortunately for him, Vi meets him in a dilapidated old lighthouse; and when she falls through the rusted guardrail, he refuses to save her. Exit Vi. Problem solved...

Nope. Turns out Vi's spirit is still hanging around, "tormenting" Tom and still intent upon wrecking his wedding. Or, is it all in Tom's head?

After about an hour of ghostly cat-and-mouse, a beatnik boater arrives and, deducing what has happened to Vi, begins to blackmail Tom, forcing him into action to protect his secret. This, however, is witnessed by Meg's little sister, Sandy. Tom is about to off Sandy as well, but Vi's ghost arrives and finally exacts her revenge.

For the Mystery Science Theater 3000 episode see here. Not to be confused with the 2009 British film of the same name.