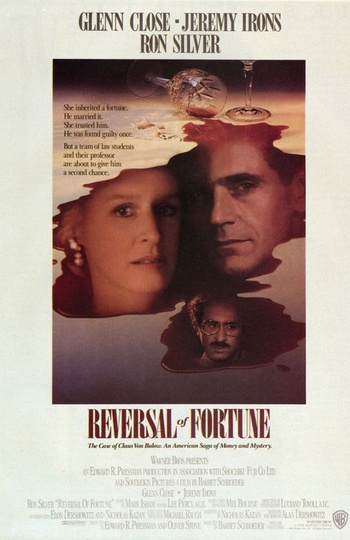 Alan Dershowitz: You are a very strange man.
Claus Von Bulow: You have no idea.
Advertisement:

Reversal of Fortune is a 1990 drama Based on a True Story, directed by Barbet Schroeder.

It's about Claus von Bulow (Jeremy Irons), a British aristocrat of Danish-German extraction living in Rhode Island at the time, who was tried and convicted of attempting to kill his wife Sunny (Glenn Close) by injecting her with insulin, which put her into a coma. Von Bulow, who maintained his innocence throughout, hired law professor/lawyer Alan Dershowitz (Ron Silver), who successfully appealed the verdict.

The film was very well reviewed when it came out, and Irons won an Academy Award for his performance (the film itself received two other nominations for Best Director and Adapted Screenplay).