Refuse to Rescue the Disliked 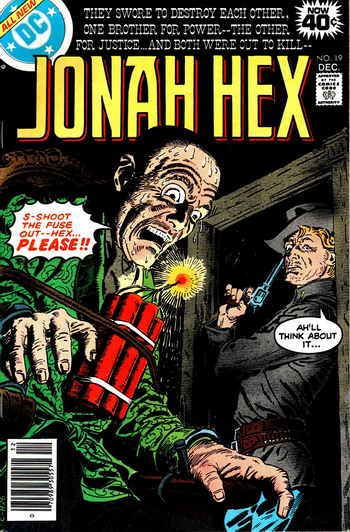 Heroes always save people, and that includes those who treated them unfairly or have committed a number of crimes. Unfortunately, for those kinds of people, not all heroes are willing to save them and they will be more than willing to let them suffer or fall to their death.

The character that the hero refuses to rescue can be a villain, a Jerkass, or someone that the hero personally dislikes. If it's the villain, the hero's reason for not saving them is because the villain has gone Beyond Redemption and would rather allow them to fall to their Karmic Death than to show them mercy which will lead them to commit more crimes. If it's the jerkass, the hero's reason for not saving them is because they treated him poorly and they deserve to be in the predicament they're in. If it's someone the hero personally dislikes, it could someone the hero sees as annoying or inferior to him. A hero who does this can be an Anti-Hero, Good Is Not Nice, or Good Is Not Soft (to truly wicked villains).

In villainous variations, the villain's motive for not rescuing someone is because they simply don't like the victim. Sometimes, the person the villain refuses to save is the hero since after all, they are arch enemies and the hero would just ruin his plans.

In some cases, this doesn't last long. The hero will eventually end up saving the villain, jerk, or annoyance, albeit with some reluctance. Sometimes, it could be their conscience that causes them to return to help the unlikable person. Sometimes, they'll get called out by their friends, either being told that they're no better than the enemy, that the villain/jerk isn't such a bad guy, or that they're no real hero. Villains who eventually save the life of those they don't like can be due to pragmatic reasons or to show that he isn't that bad after all.

This can be common in a Feud Episode or an Achilles in His Tent plot where a group of friends get into a fight, or one friend quits the team, but changes their mind and saves their friend's life, thus restoring their friendship. It's also seen in tandem with My Friends... and Zoidberg — if they reluctantly decide they're here to rescue everyone, Especially Zoidberg, it can double as both a Heartwarming Moment and a Harbinger of Asskicking.

When this trope is applied specifically to a hostage situation, it's You Can Keep Her!. May lead to Murder by Inaction. If they refuse to save someone because it's not their problem, it's Bystander Syndrome. If they react to the disliked's predicament with glee, especially if the disliked is beyond rescuing, that's And There Was Much Rejoicing. Contrast Save the Jerk (a hero saves a jerkass), Save the Villain (a hero saves a villain), Villainous Rescue (a villain saves a hero), Complaining About Rescues They Don't Like and Unwanted Rescue, and compare Mistreatment-Induced Betrayal and Callousness Towards Emergency.