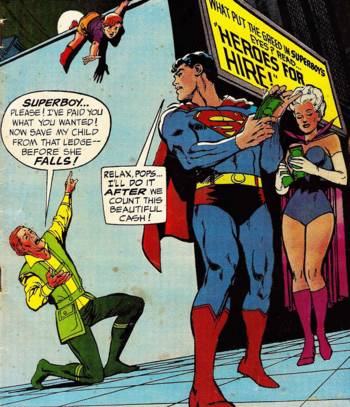 This is when a hero doesn't immediately rescue the Damsel in Distress. He has the means and the ability to do so, but for whatever reason, it's not the right time.

Maybe he has more work to do and doesn't want to be discovered. Maybe the Damsel in Distress is just going to get in his way or complicate matters if she's rescued. Maybe she's actually more insistent that he catch the villain.

Whatever the reason, the hero leaves the damsel in distress (at least for the time being), while he goes off to thwart the villain, find the magical MacGuffin or accomplish some other task.

A sub-trope of Damsel in Distress. Compare Passive Rescue, where someone is given the means to get themselves out of distress, and Something We Forgot, where the hero doesn't immediately rescue someone because they've forgotten about their situation. See also Take Your Time, when seemingly urgent events in a video game can be put off indefinitely by the player while they do other things.

Upon finding Marion, Indy elects to leave her Bound and Gagged so he can have more time to find the Ark.

Upon finding Marion, Indy elects to leave her Bound and Gagged so he can have more time to find the Ark.