Western Animation / Scooby-Doo and Guess Who? 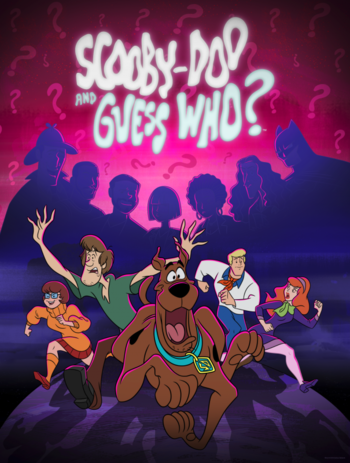 They’re back... and they’ve brought some friends!
Scooby-Dooby-Doo, and guess who?
We know you're one-in-a-million,
We can count on you, Scooby-Doo,
To catch and unmask that villain!
Advertisement:

Scooby-Doo and Guess Who? is an American animated series based on the Scooby-Doo franchise and the thirteenth incarnation.

Faced with some of their toughest mysteries yet, Fred, Daphne, Velma, Shaggy, and Scooby-Doo will join forces with some of the biggest names in celebrity and pop culture including NBA superstar Chris Paul, recording artists Halsey and Sia, Ricky Gervais, Kenan Thompson, Bill Nye the Science Guy, Neil deGrasse Tyson, Mark Hamill, Wanda Sykes, Steve Urkel (voiced by Jaleel White reprising one of his iconic roles), Batman (reprised by Kevin Conroy), Sherlock Holmes, The Funky Phantom, The Flash, Wonder Woman, and many more!

Production started in 2017 and was announced in May 2018. The show is executive produced by Chris Bailey (Kim Possible), with Michael Ryan (Scooby-Doo! Mystery Incorporated) serving as story editor.

, it was renewed for a second season before the show premiered. The first

season dropped on June 27, 2019, with episodes airing weekly until September 19. The series was also airing two weeks behind on traditional television broadcasting through Cartoon Network, every Monday at 10:30 am EST, until August 12, 2019. As of October 1, 2020, the show has been airing on Boomerang. On October 1, 2021, the series moved to HBO Max, where it aired its final episodes.

Without other options left, Wonder Woman decides to face the Monotaur on a Final Showdown, in her own way

Without other options left, Wonder Woman decides to face the Monotaur on a Final Showdown, in her own way