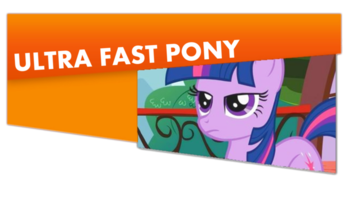 "If there's a worse series out there, this is probably it."
"as bad as this may sound, I'm trying to bring back stupidity to abridged series"
— wacarb
Advertisement:

Ultra Fast Pony is an Abridged Series created by wacarb

, based on My Little Pony: Friendship Is Magic. Starting in August 2012, it is the longest-running of any MLP:FiM abridged series, covering the entirety of the show's first four seasons, as well as the first two Equestria Girls films.

In a version of Equestria with a much weaker Fourth Wall, Twilight Sparkle learns that a world-ending catastrophe is imminent (and that's probably a bad thing). With "help" from five Ponyville mares, and liberal exploitation of plot holes, Twilight prevents the apocalypse. As a reward for her heroism, Princess Celestia banishes Twilight to Ponyville.

Twilight proceeds to learn firsthand about the Magic of Vitriolic Best Buds-ship from her five new friends: Applejack (a simple apple farmer, and certainly not a high-ranking member of a massive criminal empire), Rainbow Dash (the fastest and most irritating pony alive), Rarity (a dressmaker with a suspicious tendency to injure herself), Pinkie Pie (an energetic fangirl and gadfly), and Fluttershy (who's just so shy). Shenanigans ensue, mixed with large helpings of snark, satire of the brony community, Lampshade Hanging, and Self-Deprecation.

Double-subverted at the end of the episode. As she's flying back to the moon, the last thing she says is a very quiet, "Sand."

U-Z
IT'S FINALLY OVER! FLEE WHILE YOU CAN!
Feedback

In a comedic example, the censor for the word "bitch" arrives far too late.

In a comedic example, the censor for the word "bitch" arrives far too late.