Recap / My Little Pony: Friendship Is Magic S3 E3 "Too Many Pinkie Pies" 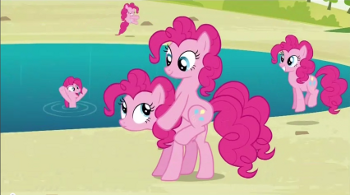 The best thing about me is that there's so many of me!
Pinkie Pie(s): FUN!!!
Written by Dave Polsky
Advertisement:

Pinkie Pie is hanging out with Twilight in the town square when she sees Rarity in a new outfit she's designed. Disappointed that she missed out on seeing the garment come together, Pinkie has the unsettling realization that she just doesn't have enough time to hang out with all her best friends, and will have to miss out on fun with them. She nevertheless tries to both hang out with Rainbow Dash at the swimming hole and help Applejack put up a new barn at Sweet Apple Acres, until Twilight comments:

Twilight: I'm afraid no matter how hard you try, the only way to pull something like that off is if there's more of you to go around!

Thus, Pinkie remembers the legendary Mirror Pond (also called the Mirror Pool), which is said to create a magical clone of anypony who recites a magic rhyme and gazes into its depths. She stumbles upon the pond in an underground cavern deep in the Everfree Forest, and soon finds herself face-to-face with an exact duplicate of herself who's ready and eager to have fun—perhaps a little too eager. As she heads off to play with Rainbow Dash, Pinkie instructs her clone to go to Sweet Apple Acres, so the clone can tell her all about Applejack's day.

At the swimming hole, Pinkie finds that Rainbow Dash is tuckered out from a long morning of cloud-wrangling and would rather relax on the shore, so she swims quietly so as to not disturb her friend. The clone, meanwhile, is sidetracked on her way to Applejack's when Fluttershy invites her to a tea party with her woodland friends. Now the clone becomes torn between which friend to spend time with, and rushes back to Pinkie for advice. The solution seems simple enough: make more clones so they can have more fun! Unfortunately, the clones get too carried away and keep copying themselves until there are dozens of Pinkie Pies running around Ponyville.

It dawns on Pinkie that her clones don't share her consideration for her friends, and she watches in horror as they disrupt Rainbow Dash's rest and knock down Applejack's unfinished barn in their attempts to have "fun". Soon a mob of angry ponies swamp Twilight's library to demand a solution to this infestation of Pinkie Pies. Twilight and Spike find a book hidden away in the library containing a spell that will send the clones back into the Mirror Pond. Of course, there's a catch: the spell doesn't just work on clones so if she's not careful, Twilight could banish the real Pinkie into the pond by mistake. With all these Pinkies running around acting weird, not even the original Pinkie is sure who the real one is anymore.

Fortunately, inspiration strikes when Pinkie suggests that Twilight give an unfun test to root out the clones; after all, only the real Pinkie would be willing to do the most boring task if it means staying with her friends. Taking this to heart, Twilight and co. herd the many, many Pinkie Pies to town hall for the test: watching paint dry! Sure enough, the Pinkie clones get distracted one by one and are zapped back into the Mirror Pond until only one remains: the original Pinkie Pie, who has definitely learned her lesson; don't try too hard to be there for all her friends and true friends will be willing to accept she can't be everywhere at once. After a long day of excitement — and blocking up the entrance to the Mirror Pond — the only thing Pinkie wants to do now is take a nap.