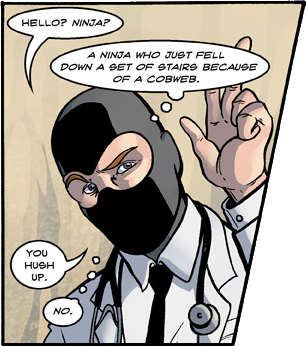 "Don't forget! Dr. McNinja is CRAZY."
"Kill them all."
"Hmm, are you sure?"
"Yes."
"Well, I'm convinced."
— The Medic, when equipped with the Second Opinion, Team Fortress 2
Advertisement:

It seems that in fiction split personalities can talk to each other, manifesting as Hearing Voices. Sometimes the various personalities will talk to each other inside the character's head, sometimes one of them (by implication the "real" or "dominant" one) will talk out loud, and sometimes they'll all talk out loud, being distinguished by cinematography, facial expression or vocal differences. While different people in a multiple personality group can and do talk to each other, this is of course exaggerated for dramatic purposes in media portrayals of multiple personality — see Split Personality for a more in-depth explanation.

Even entirely sane (or mostly sane) people can be prone to this trope, if the other voices represent simple conflicting desires like "brain versus heart", "id versus superego", or Good Angel, Bad Angel.

Not to be confused with Talking to Himself, which is about characters sharing a voice actor. Compare Holding Both Sides of the Conversation, where one person is pretending to be two different people (at the same time, in conversation) in order to maintain some charade. This is a specific form of Shifting Voice of Madness, where the "voices" are in conversation with each other.

Very important: do not confuse Thinking Out Loud with this. Thinking Out Loud is not a symptom of mental illness in most casesnote (and is actually a recommended coping mechanism for ADD/ADHD, some learning disabilities, recovering from a stimulant drug addiction, or similar attention or concentration deficit issues).

For instance of a person who is literally speaking to another version of themself due to things such as Cloning Blues, Literal Split Personality, or Time Travel, see Which Me?

In Real Life, multiple-personality selves do talk to each other (including talking out loud, discreetly) or can learn to do so. This communication is actually a good sign and is encouraged by doctors.

Dylan becomes convinced he has spotted aliens cornering Roxy, which leads him to start having a conversation with himself.

Dylan becomes convinced he has spotted aliens cornering Roxy, which leads him to start having a conversation with himself.