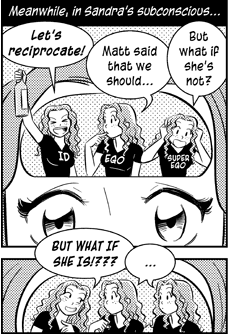 Sometimes, the id can be very convincing.
Since All Psychology Is Freudian according to Hollywood Psych, the ideas of Sigmund Freud, while largely discredited today, are brought up and explored in popular media. One of the ideas that's propagated the most, even if people don't realize it, is the idea of the Id, Superego, and Ego. Since the three are basically three competing elements of the human psyche, it's easy to extrapolate this into a group of three characters, with each character representing each element. In other words, a Freudian Trio. Most of the time this trio is represented in the form of a Devil and Angel on a character's shoulders, with the Devil representing the Id, the Angel representing the Superego, and the person in between being the Ego. Another fairly common interpretation sees the three characters represented as living inside the head of their 'owner'.
Advertisement:

But what exactly are the Id, Superego and Ego? Freud theorized that the human psyche was made of three constructs whose interactions determine the behavior of the person in question. In general, the Id handled instinctual behavior, the Superego desired for critical and moral behavior that fit within social norms and the Ego played the realistic and rational role.

Also important to note is that the terms "Id", "Superego" and "Ego" were not used by Freud: being Austrian, he used the terms "das Es", "das Über-Ich" and "das Ich", or "the It", "the Over-I" and "the I", respectively. To German-speakers, these ideas were more or less self-explanatory by the names but his English translator James Strachey found it difficult to find English terms that had the same weight. Strachey decided to go with Gratuitous Latin instead.

Note that in modern psychology, these terms are not always used in a technical analytic sense, though they are still used. Theories have moved on, but the idea of these psychological systems, described by Sigmund Freud and elaborated on by others, including his daughter Anna, remain a part of the vocabulary. Just as neo-Freudian thinking is on the way out, modern neuroscience is on the way in; that is fitting, as Freud as himself a doctor. In a neuroscientific sense, the id corresponds roughly to the lower brain, the limbic system and the area of the amygdala, controlling basic urges and fight-or-flight responses. The ego might be thought of as the main processing regions of the brain; your frontal cortex is particularly important in explicit decision-making. The superego can be found in the inhibitory processes of the brain; rather than a structure, it exists as schema, or mental structures, that influence how we interpret information. The superego is seen as the seat of moral reasoning; developmentally, this corresponds to the last layers of cells that mature in the frontal cortex. Note that the human brain is generally not considered massively modular, but uses a lot of distribution of functions; hence Freud's metaphors remain useful for conceptions in which thinking of the human brain as wiring is not helpful.

Simply put, the Id comprises the basic, instinctual drives, acting according to the "pleasure principle". With Id alone, humankind is essentially no better than any other animal. The Id is, by definition, both completely disorganized and completely unconscious: no one is capable of intentionally acting on pure Id. The Id has no judgments of anything; there is no good or evil and no sense of morality at all.

Freud described the Id has having two basic instincts that are opposite but equally present: the life instinct and the death instinct. The life instinct is the desire to create, and since this is an article on Freud you should already know what kind of "creation" it's referring to. More generally, it encompasses a desire to bring organic life into fruition and fulfillment; the fulfillment part has it encompass anything pleasurable. The death instinct, on the other hand, is expressed through aggression, with the rationale being that it mirrored the life instinct by being a desire to send organic life back into death.

Non-sentient life can be considered to be acting on pure Id, as they have no ability to handle the higher thinking that the Superego and Ego control. Sentient characters whose actions are dominated by their Id are often portrayed as Sociopaths.

The Id is often compared to the Shoulder Devil, but it differentiates from it by virtue of not being *evil*, but instinct-based.

In contrast to the Id, the Superego acts essentially as the person's critical and moralizing conscience. While the Id desires simple self-gratification, the Superego desires for the person's behavior to be based on what's socially acceptable. It criticizes the Id's desires and controls the person's morality and sense of right and wrong. On a more intensive level, Freud theorized that the Superego was an internal symbol of the strong father figure: one who would discipline the person for misbehavior and instruct the person on cultural demands and regulations in their youth.

The rationale behind all this is some of Freud's more sexist theories. To him, the Superego was a product of a boy's elimination of his Oedipus complex and acceptance of his father as an authority. As women do not identify with the father, their Superego is less developed and they are, at the core, more emotional. (Although, in light of gender roles starting to change in the Early '30s, Freud adapted his theory to include an 'Electra Complex', which was basically the same thing as the Oedipus complex.)

A character acting entirely on Superego would be one whose actions are based entirely on social norms and expectations. These characters are often portrayed as rather shallow and short-sighted, since you can't please everyone. People on the Autistic Spectrum have some difficulties understanding social conventions, don't concern themselves with them, or may think that they can find a way to please everyone, and theoretically this is the aspect of their personality which is the most confused.

The Superego could be classed as the Shoulder Angel, that is, if your rules could be considered "good".

The Ego is perhaps closest to the conscious human mind. It is the organized part of the consciousness and organizes the rest of the psyche into something coherent and productive, in that it separates out what is real. Interestingly, while the Ego is commonly thought of today as a central mediator between the competing demands of the Id and Superego, Freud thought of it as more of a middleman in a hierarchy, taking the Id's self-gratification and organizing it in a way that complies with both the Superego's demands and the conditions of the real world, with the Superego punishing the Ego with feelings of guilt, anxiety, or inferiority if the Ego acts out of line. The Ego is therefore said to be driven by the Id and confined by the Superego, rather than a true balance between the two. In a way, the relationship between the Ego and Id is closer to a Straight Man and Wise Guy or Boke and Tsukkomi Routine.

Obviously, the Ego is the character whose shoulders the Angel and Devil stand on.

As a Power Trio, the three were represented by The McCoy, a character who acted on instinctual and emotional compulsions, The Spock, a character who was more concerned with social principles and The Kirk, a third central character that mediated the two, usually while being able to Take a Third Option that would satisfy the competing demands of the two Foils. Over time, the two Foils of Star Trek were Flanderized further until one was emotional to the point of ignoring logic and one was dispassionately logical, often to the point of ignoring social norms that would go against such cold behavior.