Characters / Doctor Who  The TARDIS

The TARDIS (All Doctors) 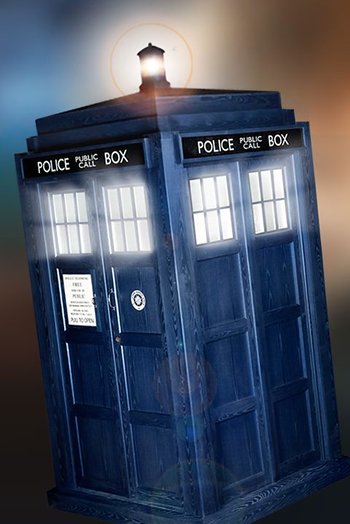 A sapient, sentient Starfish Alien with a symbiotic link to the Doctor. One of the centrepieces of Doctor Who, the TARDIS has been there since day one — and remained ever since, stuck in the form of a British police telephone box. Sure, she's a temperamental oldnote The word "old" is an understatement. The Doctor says they're 2,000 years old — but they lie about their age, and have forgotten how old they really are, so they're probably much older, something which The Timeless Children confirms; they have had several Regeneration cycles and the TARDIS has apparently been there for all of them, making her nearly as old as Time Lord civilisation. Type-40 TARDIS and has almost been through more face-lifts than the Doctor themself (the interior set has changed a lot, while the outer prop has had minor changes to its police box form

), but the TARDIS is a constant of the franchise. Trope Namer for Time and Relative Dimensions in Space.

The 2011 episode "The Doctor's Wife" unveiled many previously unknown facets about the TARDIS when her consciousness was briefly transferred into a human female's body, including the confirmation (after first being hinted at in the 1960s) that she's alive, that she feels affection for the Doctor and that, despite claims to the contrary, she's not actually broken or faulty (well, aside from being stuck in police box form, of coursenote And even that is up for debate as some stories suggest she's not broken and just stays that way because the Doctor likes the design. Eight confirms that to be true, that he likes the design, to Grace in the 1996 TV Movie. Implications are that, even if it's not broken, the TARDIS refuses to change her appearance more than a certain amount, to account for the differences in the Police Boxes' styles, to make sure her Thief doesn't forget where they parked her. Again.) — she's just temperamental and, being able to see all of Time and Space at the same time, takes the Doctor where they need to go — even if they don't want to go there.

Like her "owner", she may be just as insane as they are.