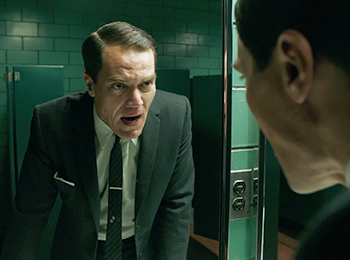 Mirror on the wall, here we are again.
Through my rise and fall, you've been my only friend.
You told me that they can, understand the man I am!
So why are we, here, talking to each other again?
— Bruno Mars, Mirror
Advertisement:

A character talks to their reflection in the mirror. Usually, it's a male character giving himself a pep talk.

If the reflection talks back, it's a case of The Man in the Mirror Talks Back. If they're practicing a speech to someone else, it can be a Trick Dialogue — and may feature Unaccustomed as I Am to Public Speaking.... If it's delivered to some other object—a pet, a tombstone, a skull—it's a Surrogate Soliloquy. If the character winds up shattering the mirror in a fit of anger or sorrow, it's Rage Against the Reflection. If they say something along the lines of "You Talkin' to Me?", it's a reference to the famous scene from Taxi Driver.

A variation of this trope does not involve the character speaking. This version of the trope shows a stressed character washing their face at a washbasin, then staring at themselves in the mirror.

Squidward has a talk with his reflection to try and get his mind off SpongeBob.

Squidward has a talk with his reflection to try and get his mind off SpongeBob.