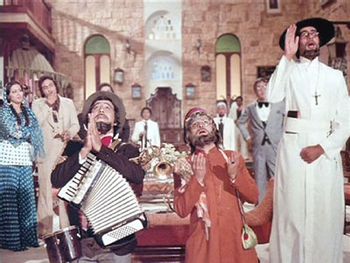 Your favourite 70s Bollywood actors in action. I shit you not.
Is there seriously no description of this Anvilicious film? Sweet Jesus...Hey Ram... Astaghfirullah....
Advertisement:

This movie directed by Manmohan Desai is played by Amitabh Bachchan, Vinod Khanna and Rishi Kapoor.

A family gets separated. Three brothers are brought up by three different families. The oldest is Amar who grows up to be a Hindu police officer. The second brother is Akbar who raised as a Muslim by his tailor dad. The third brother is a ruffian skirting around the law, a Catholic named Anthony Gonzales. The boys meet again and their lives become entangled in an incredible twist of unlikely coincidences and furious action sequences interspersed with songs. Their mother is separated from them as well and is blind. She recovers her sight nearer the ending, the criminal mob boss who unwittingly caused all the commotion is punished, and the family is at last re-united.

It was the biggest blockbuster of 1977 and has also won several Filmfare awards.