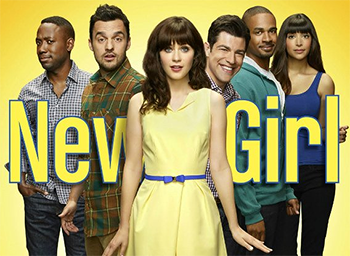 Who's that girl? It's Jess!note And also (left-to-right): Winston, Nick, Schmidt, Coach and Cece.
"So, you know in horror movies, where the girl's like, 'Oh my god, there's something in the basement... let me just run down there in my underwear and see what's going on in the dark.' And you're like, 'What is your problem? Call the police!' And she's like, 'Okay!' But it's too late, because she's already getting murdered — well, my story's kind of like that."
— Jess Day
Advertisement:

New Girl was an American Roommate Com created by Liz Meriwether as a starring vehicle for Zooey Deschanel. It premiered in 2011 on FOX and ran for 7 seasons before ending in 2017.

Jessica "Jess" Day (Deschanel) surprises her boyfriend at home only to find him with another girl. One sudden and swift break-up later, she now has no place to stay. Answering a Craigslist apartment ad (believing it to be for female roommates), she finds herself applying to share an apartment with a group of guys. Desperate for a room, she convinces them to bring her in, mostly through the knowledge that she's friends with Cece (Hannah Simone), a model who's friends with yet more models. Jess is a socially awkward school teacher prone to singing her words for no reason, putting on cartoon accents, dancing horribly, and can be hard to lock into a straightforward conversation.

The guys in the apartment are:

The guys struggle to deal with her mood swings, but they grow close to her as they help her move on with her life. She, in turn, helps them to get their act together and move on with their dreams. The gender clash makes things interesting and the characters and show develop beyond the apartment setup once the guys fully accept Jess into their lives.

In May 2017 it was announced that the show's seventh season would be its last, and would involve a three-year Time Skip for the characters. In 2022, Deschanel, Morris, and Simone began a podcast, Welcome To Our Show, about their time on New Girl.