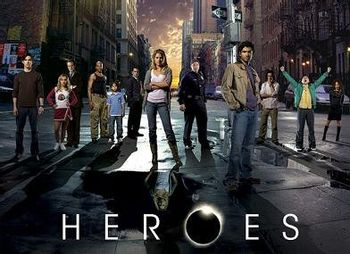 From a writer of the somewhat similarly-themed Misfits of Science, Heroes is an ambitious Story Arc-based series about what would happen if people with super powers started appearing in the "real" world.

Heroes is best known for a few certain things: its overwhelmingly vast array of characters, its heavy, complex, and fast-moving storyline, and its creative use of online content.

The first "Volume" (see note below) of Heroes begins with a seemingly ordinary group of people who gradually become aware that they have special abilities. The story develops showing their reactions to these powers, and how this discovery affects their personal and professional lives. At the same time, several ordinary individuals are investigating the origins and extent of these abilities. Mohinder Suresh (Sendhil Ramamurthy), a research geneticist, continues his late father's research into the biological source of the powers, while Noah Bennet (Jack Coleman) represents, and is a lead agent for, a secret organization known only as "the Company" that wants to control and, if necessary, terminate those who are gifted. After only having a short time to come to terms with their new abilities, each of the heroes is drawn into the final showdown. They must each do their part to stop the destruction of the world that starts with an impending explosion at Kirby Plaza in New York City

Season two, known as "Volume Two: Generations", begins four months after the events at Kirby Plaza. The main plot of Generations deals with the Company and its research on the Shanti virus. In a flashback to 1977, the research is performed by the Company's founders, whose identities are eventually revealed, to discover what the effects of various strains of the virus will do the human and superhuman population. The virus is weaponized and locked away at Primatech Paper, the Company's facility used as a front. Returning to the present, the heroes must come together in an attempt to stop the release of a deadly strain of the virus and avert a global pandemic.

The first part of season three is called "Volume Three: Villains". Volume three begins with an assassination attempt on Nathan Petrelli (Adrian Pasdar), a political figure who can fly, and explores its consequences. Meanwhile, several villains escape from the confines of Level 5, a maximum security area owned and operated by the Company within Primatech, and Noah Bennet attempts to recapture them. Arthur Petrelli (Robert Forster), Nathan Petrelli's father, heals from systemic nerve damage and aims to create a formula to give ordinary people superhuman abilities. The second part of season three, "Volume Four: Fugitives", reveals what happens after Nathan fails to produce the formula. After the destruction of Primatech and Pinehearst, the rival company of Primatech, the heroes attempt to lead normal lives until Nathan initiates his plan to round up all people with abilities. Sylar (Zachary Quinto) kills Nathan in an intense duel. However, because Nathan is a prominent political player, Matt Parkman (Greg Grunberg), who has power over people's minds, is instructed to alter Sylar's mind so that he will believe that he is Nathan and take his place. This has a negative side effect causing Sylar's consciousness to become trapped in Matt Parkman's mind.

Season four contains volume five, "Redemption", and takes place six weeks after the events of season three. The heroes try to return to their normal lives; Peter (Milo Ventimiglia) returns to his job as a paramedic, while Claire (Hayden Panettiere) attends college. Sylar's body is causing his previously acquired abilities to manifest as he struggles with his forced identity as Nathan. Sylar's actual consciousness, trapped in Matt Parkman's mind, taunts Matt and seeks out his own body. Meanwhile, Hiro (Masi Oka) has to deal with his brain tumor that is slowly killing him and preventing him from controlling his powers. A carnival group is introduced whose leader, Samuel, tries to recruit more people with abilities into his carnival family. Samuel claims he is creating a community for special people where they are welcome to be open with their abilities and respected by outsiders. In truth, he is bringing together as many people with abilities as possible to build up his own power, moving earth. The more special people he has around him, the stronger his power is. The heroes have to come together to battle Samuel and his plan to expose "specials" to the world by killing thousands of people. The series finale ends by opening the nonexistent volume six, "Brave New World", in which Claire reveals the existence of people with special abilities to a group of reporters and photographers.

On May 14, 2010, NBC officially cancelled Heroes. While there were some rumors of a follow-up television event or more dabbling in the Expanded Universe to clinch the series, gears only started turning three years later

when some talk surfaced to continue the show in the same universe, but with a different cast and crew. An official confirmation came on February 22, 2014, with the announcement

of Heroes Reborn, a 13-episode miniseries that aired in September 2015. As said before, it focused mainly on a new cast of characters with Noah Bennet, his partner Rene, Hiro Nakamura, Matt Parkman, Mohinder Suresh, Micah Sanders, and Angela Petrelli returning to bridge the two series together.

Be sure to check out its character sheet page. There is also a tool for gathering and voting (or venting) on your Biggest Complaints.

Also see the page for its Tie-In Novel, Saving Charlie.

NOTE: Heroes, wanting to be different, has "Volumes" instead of seasons. Each Volume is its own Story Arc: Volume 1 = Season 1; Volume 2 = Season 2; Volume 3 = Season 3 in the winter; Volume 4 = Season 3 in the spring; Volume 5 = Season 4. The ending episode of each volume includes a sneak peek at the next volume so Volume 5 ends with a cut-in to Volume 6 (which never materialized, as the show was canceled after Volume 5).