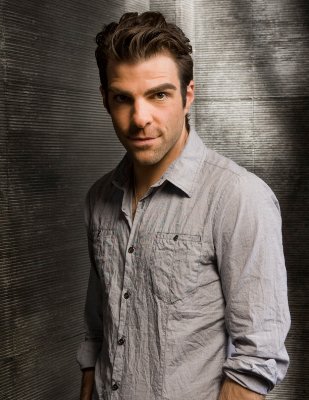 He's not Spock, either.
"What scares me? Oh, now that's a big question. I don't know what scares me — cockroaches, nuclear apocalypse. Fear is an interesting thing. It has a place in all of our lives. I try to be as fearless as possible. I don't always succeed, but I like to think I try."
Advertisement:

Zachary John Quinto (born June 2, 1977 in Pittsburgh, Pennsylvania) is an American actor. Getting his start in bit roles on television, his role as the villainous Sylar on NBC's Heroes was his breakthrough performance, which ultimately led to his casting as Spock in J. J. Abrams' Star Trek film series. He's also widely known for starring in two seasons of FX's American Horror Story.

Zachary is also one of Hollywood's most prominent openly gay actors, and he used to date Jonathan Groff.