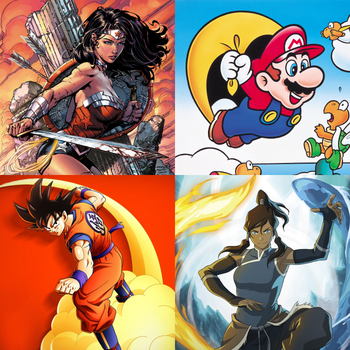 ♫ He's gotta be strong, and he's gotta be fast
And he's gotta be fresh from the fight! ♪
L - R, top to bottom: Wonder Woman, Mario, Goku, and Korra.
"You see that you and I are of a different stripe, don't you? We don't have to dream that we're important. We are."
— Mr. House, Fallout: New Vegas
Advertisement:

The good guy, seeks to defeat the villain, save the princess, find the treasure, etc. Generally the central figure in Action Series and Adventure Series. Always wins in the end.

This list is about different kinds of heroic characters. We also have a specific list of Hero Tropes, which are ways that heroes are made heroic in storytelling.

If you're looking for something about the show of the same name, try Heroes (and if a link from another page sent you here instead of there, feel free to correct it — no-one may ever know you did, but virtue is its own reward!). You may also be looking for our page on the David Bowie album "Heroes".

Contrast this index with its antithesis, Villains. There's also a Wiki