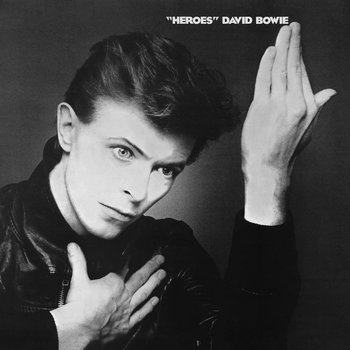 "Just for one day."
"There's old wave, there's new wave, and there's David Bowie."
"Tomorrow belongs to those who can hear it coming."
— Taglines from the album's advertising campaign.
Advertisement:

"Heroes"note yes, the Scare Quotes are part of the album's title and Title Track is the twelfth studio album by David Bowie, released in late 1977. It was his second collaboration with Brian Eno, with whom he previously worked on Low in late 1976 and would work again on Lodger in late 1978/early 1979note these years refer to the recording sessions for Low and Lodger; Low was released in January 1977 and Lodger in May 1979, and as such is the second part of what critics and fans call the "Berlin Trilogy" of his Krautrock/art rock/proto-Post-Punk albums.

As with Low, "Heroes" consists of ambient-inspired art rock, with lyrical songs encompassing side A and instrumentals occupying most of side B. However, "Heroes" is considerably more accessible than its predecessor; while Low was proto-Post-Rock with minimalist lyrics, the songs on "Heroes" are familiarly Bowie-esque art rock, among other things featuring stream-of-consciousness lyrics with word salad tendencies that presage Lodger. Bowie was highly enthusiastic about the album's production, pulling all-nighters and working closely with Eno to provide an album that was less melancholic than Low while going deeper into its experimental direction, finding a middle ground between it and Bowie's trademark brand of leftfield rock. The end result was a much more upbeat album that more closely reflected Bowie's natural artistic passion, embodied by a highly improvisational composition and recording process.

Released at a time when artists influenced by him were first reaching mainstream prominence (particularly the Punk Rock movement, influenced by Bowie's Glam Rock material from the early '70s), Bowie promoted "Heroes" aggressively throughout the rest of 1977 and 1978, contrary to the intentional lack of promotion for Low. Between numerous interviews, TV performances (including a spot on Bing Crosby's posthumously-aired final Christmas special), and an extensive world tour, Bowie was adamant in ensuring that people understood his enthusiasm for the album. The effort paid off in the UK, where "Heroes" peaked at No. 3, staying on the charts for 26 consecutive weeks before ultimately going gold both there and in Canada. In the US, it peaked at No. 35 on the Billboard 200.

"Heroes" was supported by two singles: the Title Track and "Beauty and the Beast".

Tell you who you are if you trope me to my car: