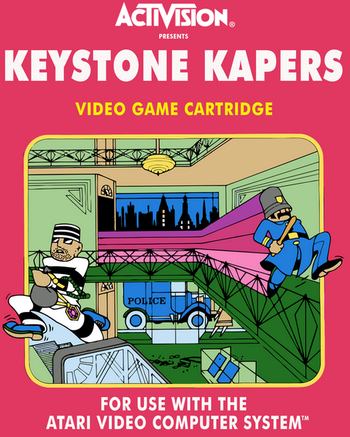 Keystone Kapers is an Atari 2600 Platform Game, designed by Garry Kitchen and published by Activision in 1983. It was also ported to the Atari 5200, the Atari 8-Bit Computers, the ColecoVision, and the MSX.
Advertisement:

In the game, you play as Keystone Kelly who must chase after Harry Hooligan in a department store and catch him before he escapes through the roof. Along the way, you must avoid obstacles such as radios, shopping carts, and toy planes that either waste your time or cause you to lose a life upon contact. You can also use the elevator to shave off some time in your chase, but be careful because Harry Hooligan knows you're coming after him.