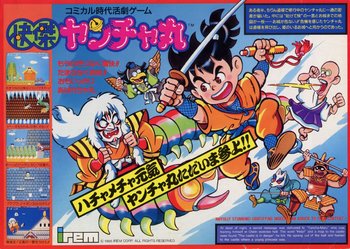 Japanese boxart of the first game. Used because it gives a better idea as to what the series is like than the American boxart.
"WILL HELP YOU!"
— Opening cutscene (US version)
Advertisement:

Kid Niki: Radical Ninja is a side-scrolling arcade Platform Game created by Irem, set in a fantasy version of ancient Japan. The game was originally titled Kaiketsu Yanchamaru in Japan; Data East USA's localization gave it a "rad" 1980s makeover. Ports of the game were released for the Nintendo Entertainment System, Apple ][ and Commodore 64.

Tropes contained in the sequels: