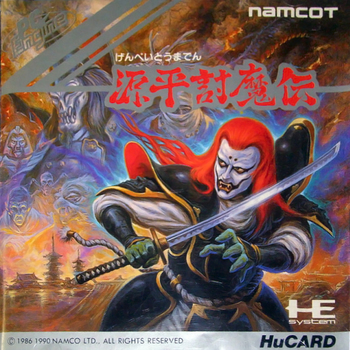 Genpei Tōma Den (源平討魔伝) is a Japanese game series taking place after the Genpei War. One of the samurai killed in the war, Taira no Kagekiyo,note Although, in actuality, he was captured, refused all food and drink, and eventually starved to death. is brought back from the dead as a wraith in order to get his vengeance. He slashes his way through the living, dead, and undead to finally defeat Minamoto no Yoritomo, who has Japan tossed in disarray and chaos upon laying claim to demonic powers.

There is also a fanmade fighting game available here

The game was also adapted as a web manga hosted by ShiftyLook under the name Scar.

Nowadays, the series is mainly known for contributing Taira no Kagekiyo to Namco × Capcom, where he joined many other obscure Namco characters, as well as his appearance in Namco High.

See also Mirai Ninja, a game with a similar concept and setting.