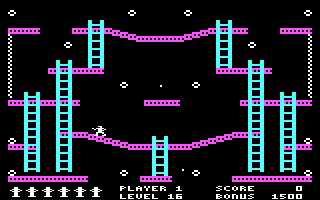 Jumpman is a Platform Game by Epyx, written by Randy Glover for the Atari 8-Bit Computers and Commodore 64 in 1983.

The hero, who is indeed a man who can jump, has to collect all bombs in every stage consisting of platforms, ladders and ropes, which moves him to the next stage. Falling should be avoided, as should numerous flying bullets. In unrelated news, the main character from the original Donkey Kong games is also called Jumpman, although later versions change him to Mario.

The trick is that every single level after the first has its own unique gimmick: moving platforms, special enemies, invisible platforms, explosive feet, you name it. The result is a lot of variety in what would otherwise be a simple platformer.

The (unofficial) series consists of the following games.

Not to be confused with the freeware rotating platform game

created by Andi McClure or Mario, who was once known as Jumpman.