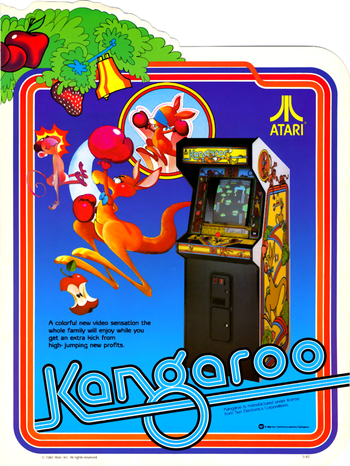 Kangaroo (カンガルー?) is a 1982 arcade game was manufactured by Sun Electronics and distributed by Atari. It was ported to the Atari 2600, Atari 5200, and Atari 8-bit computer family.

In the game, you play a mother kangaroo whose child has been kidnapped by a band of monkeys. In three of the four game levels, you must try to get Mama to the top of the screen to reach Joey while avoiding apples being thrown at you by the monkeys, either by jumping over the apples, ducking them, or punching them. In the fourth screen, you must knock down a stack of monkeys holding up the cage that Joey is held captive in while avoiding the apples.

The game has an Animated Adaptation in the form of segments that appeared in Saturday Supercade.

The game was finally given a re-release on July 16, 2020 as part of Hamster Corporation's Arcade Archives series for the Switch and PS4.