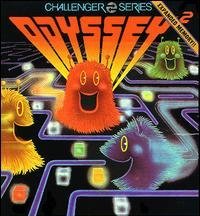 On your mark, Get set, Munch.
K.C. Munchkin! is a 1981 video game by Magnavox/Phillips for the Odyssey². The game consists of the main character K.C. running through a maze of 12 floating Munchies and eating them before the Munchers eat him. It was so similar to its inspiration Pac-Man that Atari (who held the home rights to Pac-Man) successfully sued Magnavox and got the game off the market. It was followed a few years later by K.C.'s Crazy Chase!, where K.C. now chased after a multi-segmented centipede-like creature called the Dratapillar to devour it before the single-headed insects devoured him.

The game is also available as a homebrew title for the Atari 7800.

This game and its sequel provides examples of