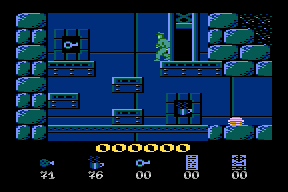 Is that a hamburger?
Hans Kloss is a Polish game released in 1992 for Atari 8-Bit Computers (and ported to Commodore 64 a year later.) It is unofficially based on the Polish TV series Stawka Większa Niż Życie, a story set during World War II about a Polish spy who infiltrates German ranks by impersonating a missing Abwehr officer.
Advertisement:

You play as the agent Hans Kloss himself, who has to infiltrate a Nazi base in order to recover plans of the V1 rocket. On your way, you're menaced by insta-killing machine guns activated by tripwires (they can be switched off, but only for a limited time), and tracked mines which randomly drive onto the screen and deplete your health and drink meters. Oh, did we mention you need to eat and drink frequently or else you die?

Gameplay-wise, the game is a classic example a genre known in Poland as labiryntówka ("maze game") or komnatówka ("chamber game"): a Platform Game where half of the challenge comes from navigating the mazelike Flip-Screen Scrolling game world, and figuring out the exact right route to take without getting stuck.