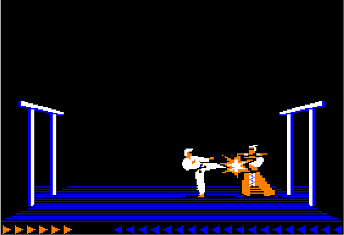 The game that started it all. Note the infamous gate.
[...] Karateka for the NES, a nice little game where you have to fight a procession of people wearing increasingly silly hats. Then you get killed by a gate.
Stuart Ashen, "Quickest Game Overs ever? Part 2"

A Beat 'em Up game originally developed for the Apple ][ system by Jordan Mechner and published by Brøderbund Software in 1984. Karateka puts you in the role of a heroic karate expert who must infiltrate the fortress of Akuma, who has kidnapped the lovely Princess Mariko. To do this, he must initially climb a mountain and get through the bodyguards who hold the entrance. Once inside the fortress, he must fight still more bodyguards and Akuma's eagle and pass the infamous death gate, before fighting Akuma himself.

The game employed rotoscoping technology for surprisingly realistic movements, a technique which would be used to similar effect in Mechner's following game, Prince of Persia. It is more well known in modern times as an Internet meme featuring the titular hero dancing to MC Hammer's "U Can't Touch This".

For the 30th anniversary of the game, Mechner, alongside developer Liquid Entertainment, released a remake,

now available on Steam and XBLA.