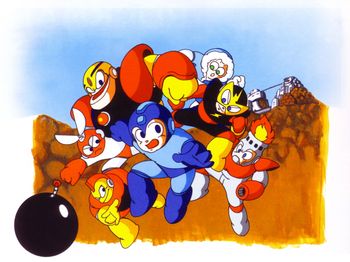 Mega Man (Rockman in Japanese) is a 1987 Nintendo Entertainment System video game by Capcom, and is the first game in the eponymous series of the same name, as well as its many, many spinoffs.

The story: It is the year 200X, and advanced robots designed to help humans in tasks are commonplace thanks to the efforts of Dr. Light, the foremost expert on robotics. One day, however, a former friend and rival of his by the name of Dr. Wily reprogrammed several of these robots, and is now trying to Take Over the World from within his fortified robot factory. To make things worse, among them are Dr. Light's six Robot Masters — humanoid robots with advanced A.I. and abilities designed for industrial use. Dr. Light's assistant robot and "son" Rock, having a strong sense of justice, volunteers to be converted into a "fighting robot" in order to disable and retrieve the Robot Masters and right Wily's wrongs. He thus becomes known as Mega Man.

At the time, Mega Man was a revolutionary title in the NES library; first, you could choose to tackle any stage you wished in any order you desired, second, to add a layer of strategy, the game allowed you to not only keep the weapon of whatever boss you killed, but also allow you to use the weapon in question against another boss that was particularly weak to it. The game's cartoony graphics and catchy music, not to mention its grueling difficulty, established many hallmarks that we've grown to love about the series.

The game was ultimately a modest hit in Japan, but performed rather poorly in sales internationally, which made Capcom reluctant to make another sequel, but they ultimately greenlighted one anyway...

One of many early ideas for the game was to make it an arcade platformer called Rainbow Man. Other proposed early titles included Mighty Kid and Knuckle Kid. The game was developed by a small team of six people, with Keiji Inafune designing almost all of the characters, enemies, and sprites. The game also gave them a lot of headaches as far as memory limitations went — the entire cart was only 1 Megabit (1000 kilobits, or 128 kilobytes) in size!

The game would later receive a 16-bit upgrade in the Europe and Japan exclusive Mega Man: The Wily Wars/Rockman Megaworld cartridge for the Sega Genesis (aside from a brief American release as a downloadable Sega Channel exclusive, and an eventual local release as a bundle with other Sega games in the Sega Genesis Mini). It would later be ported to the PS1 as Rockman: Complete Works, and then to the PS2, Nintendo GameCube and Xbox as part of Anniversary Collection. It has also seen a release on Virtual Console, and on PC as part of the Mega Man Legacy Collection. This game also received a remake for the PSP, called Mega Man Powered Up.

MegaMan has ended the evil domination of Dr. Wily and restored the world to peace. However, the never ending battle continues until all destructive forces are eliminated. Fight, MegaMan! For everlasting peace!

By pausing repeatedly, you remove the invincibility that enemies get while hit, which allows you to do massive damage. Oh, and this glitch was KEPT in the Legacy Collection.

By pausing repeatedly, you remove the invincibility that enemies get while hit, which allows you to do massive damage. Oh, and this glitch was KEPT in the Legacy Collection.