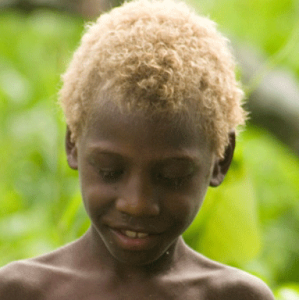 This trope in regards to human hair colors shows up more in East Asian works, where hair colors other than black or dark brown are rarest. This is by no means limited to that part of the world. The Dark-Skinned Blond and Dark-Skinned Redhead are good examples.

Implausible, but still possible in real life colorations are not reserved for human characters. Some animals of other non-fictional species have rare fur, feather, skin, or scale patterns and colorings. Despite being rare or improbable in real life, these may not be so in fiction. Rule of Cool usually applies here.

Some types of implausible colorations, such as green eyes, red hair, red hair and green eyes, and ivory skintones in humans, and truly white fur with pale or pink skin in horses, are far more common in fiction than in real life. Some overlap with Animal Gender-Bender, like male calico cats, and some overlap with Typical Cartoon Animal Colors, like brown gorillas.

This is especially commonplace in animation, graphical works, print, and text and less common in live-action. In real life, it usually requires finding a rare and expensive animal, or due to how film works, multiple rare and/or expensive animals. In animation, comics, picture books, video games, and literature this might be due to Artistic License – Biology, with the artist not realizing just how rare or improbable the animal coloration is. In other words, this trope is easier to use in animation, graphical works, print, and text, whether

Usually, this is at least a little justified. The character might have foreign parents or mixed ancestry, or dye their hair, or something more interesting (like being a robot). Note though that genetics can be funky. Even a distant ancestor from a foreign country can potentially justify a character having oddly colored hair or eyes (particularly blond or red hair and blue or grey eyes since those are recessive traits). Other conditions like partial albinism can also cause this: potentially giving a character lighter hair and or eyes than is normally possible for their ethnic group. Again, though this is genetic it can potentially skip generations. Other times, the reasons are left to the viewer's imaginations.

This trope sometimes contriblutes to Informed Species if the implausible coloration takes away from a species hallmark characteristics enough.

See Hollywood Genetics when a person has a hair color that is different than their biological family.