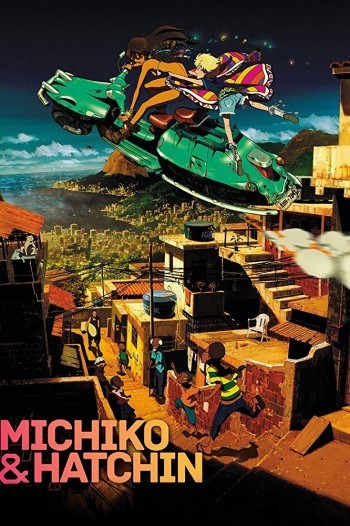 "Someone is going to come for me. It's what I've wished for all this time. On the morning of March 17th, a person came.
"The only problem... I have no idea who she is!"
Advertisement:

Enter Michiko Malandro, who recently escaped from a hellish high-security prison, and literally crashes into Hana's life on a scooter. With nothing in common but a seemingly deceased man named Hiroshi Morenos, who's Michiko's former lover and Hana's father, the two embark on a wild trip through the countryside to find him. Traveling through a fictional South American country based on Brazil, they evade Gangbangers like the infamous Satoshi Batista and cops like the persistent Atsuko Jackson, and learn to appreciate each other—just a little bit.

Several episodes were done in conjunction with Studio Bones,note Episode 3 Studio Gainax,note Episode 8 and Xebec.note Episodes 7 & 9 Funimation has licensed the series as Finding Paradiso. It was released in the U.S. in September 2013. The series also aired on Adult Swim's Toonami block from June 20, 2015 to December 12, 2015.

Hatchin gets drunk off of orange juice.

Example of:
Drunk on Milk

Hatchin gets drunk off of orange juice.