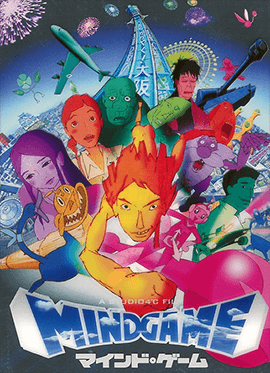 Your life is the result of your own decisions.
Advertisement:

Mind Game (マインド・ゲーム) is a Japanese animated feature film based on the comic by Robin Nishi. It was written and directed by Masaaki Yuasa and animated primarily by Studio 4°C.

Nishi is a 20-year-old, self-deprecating loser who dreams of drawing manga for a living. Since the age of nine, he has always been in love with a girl named Miyo - but although she has feelings for him, his shyness and inability to confess his love have led her to think about marrying another man. Shortly after learning of this, Nishi is shot through the butt by an angry Yakuza mobster and dies - and thus begins the story of Mind Game, a movie about second chances and living life with no regrets.

The whole movie is told in several different styles of animation, visual metaphors, intertwining plots and philosophical messages. Since its release, it has become something of a Cult Classic, being praised by directors from both the West and the East for its storytelling and visual style(s).

This film played on Toonami during April 1th, 2018 subbed.