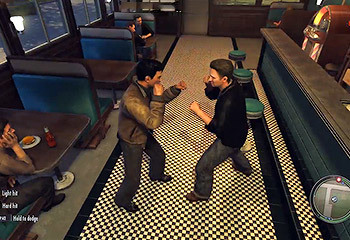 Did somebody order a knuckle sandwich?
Advertisement:

This scene might play out in more family-friendly movies where a bar could be seen as inappropriate. Maybe the scene involves teenagers, so a bar is certainly out of the question, but the writers still want to invoke the same idea as a bar brawl. It's also possible that the writers simply wanted to move the action to a different locale in order to have a nice breath of fresh air. Unlike the Bar Brawl where the hero is usually guaranteed a winner, this scene might have a more unfortunate result. Sometimes, the scene is meant to show how meek the hero is before having his or her final moment of glory. They may even end up Paying for the Action Scene.

Occasionally a follow-up to the Bar Brawl, when, after a night of drinking, the consumption of other substances and tension-building, the combatants-to-be have retired to a diner or restaurant for a meal.