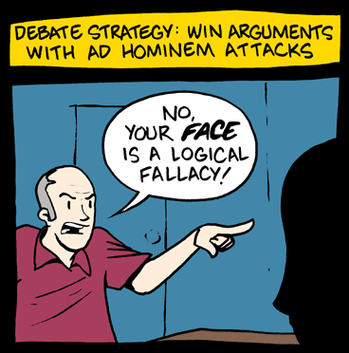 "And your ass is a circular argument!"

"If a crazy serial killer who believes he is surrounded by Teletubbies argues that if you drop a ball, it'll fall to the ground, because gravity will pull the ball towards the Earth, is he wrong? Do the arguments become less valid because you think there's something wrong with the person behind the arguments? Will the ball start falling upwards from now on?"
— Deadpan Snarker Dendrophilian of YouTube
Advertisement:

Refuting an argument by attacking some aspect of the person making it, rather than addressing the content of the argument itself. It can consist of an attack on the person making the argument; the source of their information; their circumstances; their previous position; or a discrepancy between their actions and their argument.

Additionally, calling into doubt someone's motives is only Ad Hominem if it's used as a rebuttal to their arguments. "Alice owns a company that sells bath towels, and we should bear that in mind while hearing what she has to say about the Bath Towel Control Bill" is a perfectly reasonable thing to say; it's when it imposes on the actual logic of the debate ("Alice owns a company that sells Bath towels, so what she says about the Bill is untrue") that it becomes a fallacy.

. See also Don't Shoot the Message, Hitler Ate Sugar, No, You, Hypocrite Has a Point. Damned by a Fool's Praise is also closely related. While it might not fly in a debate room, ad hominem is a staple of Battle Rapping, where it's usually referred to as "personals".

The attack is made directly on the person making the argument. Here's a standard hypothetical example:

Adolf Hitler: This is an irresponsible fiscal policy because the budget deficit is too great.
Politician: I won't listen to you! You're Hitler!

While Hitler certainly wasn't a nice person, that in itself is unrelated to the logical validity of any arguments he makes. This extends to a degree in situations where the ad hominem attack itself is related to the argument; if the supposition comes from a source that is known for fallibility or may have a reason to be biased, it should be treated with healthy skepticism, but not assumed to be false.

It would be quite logically sound to say "Why should we take their word for it?" It is not sound, however, to say that the above statement must be false, because despite the fact that the Weekly World News was noted for being full of made-up stories, George Washington was the first President of the United States. (And the Weekly World News did sometimes print true stories when they were Freakier Than Fiction.)

When the circumstances of the arguer are held to affect the truth of the argument. It's frequently rolled out against people who have any kind of motive for making their argument (the "he would say that, wouldn't he?" defense), often intended to imply that "he" is an incredibly selfish/malicious person for even looking at the idea with an open mind (or, alternatively, that his mind isn't as open as "he" claims it is). In reality, it's more unreasonable to expect someone to have no reason to hold their viewpoint; their vested interest does not automatically invalidate their criticism.

Impugning motives is a common form of this. A speaker resorting to impugning motives attacks the speaker's personal reasons for supporting a position rather than their arguments in favor of supporting the position. Of course, the underlying motives of a person making an argument do not affect the truth or validity of their argument. Furthermore, it's not necessary to impugn a speaker's actual motives - a person using this type of ad hominem often ascribes motives to their opponent and then impugns them.

Bob: "This bill will be expensive and will not work, therefore you should vote against it."
Alice: "Bob is employed by a company which stands to lose money from this bill, therefore Bob will lose money and perhaps his job if this bill passes. Of course he would oppose it."

This fallacy can be one of two types, either discrediting the opponent before they even begin to make their argument, usually by a direct ad hominem against them - "And might I just remind the audience before Alice speaks that she is a convicted felon?" - or by calling the validity of their sources or standing into question after they have made their argument. More or less the converse of Appeal to Authority; here, the attempt is to make an audience reject a claim because of the speaker's alleged lack of authority.

"You'll find Bob talks about law an awful lot for a guy who got his degree from Eastern Iowa State University."

The attempt here is to preemptively discredit Bob's standing as a lawyer not on the basis of what he's actually saying, but on where he was schooled.

The most pernicious manifestation is where entire groups are potentially shut out of the discussion, often based on demonstrably false premises:

This seems like an example, but is actually a different problem of logic:

As a reply to "This fact is true because the Encyclopedia Britannica states as much," this has a sound logical basis; because the cited reason to believe the statement is the credibility of the encyclopedia, an attack on its credibility is relevant and therefore not poisoning the well. However, as a response to the fact itself it is a fallacy since the encyclopedia containing other errors does not mean that specific piece of information is an error: to be specific, it is a Hasty Generalization. These factual errors could be minor misspellings of titles that all occurred in one mistranslated article, for example.

Another type of Ad Hominem, Tu Quoque refers to the attempt to deny an argument by asserting that the person presenting the argument either suffers from the same flaw (i.e. they do not practice what they preach) or has held an opposing view in the past. The fact that such a person is a hypocrite if he criticizes others for bearing the same flaw he does in his personal life is actually not related to actual objective facts about said flaw or his line of reasoning in condemning that flaw.

Bob: "Smoking and alcoholism are well-known as risks for cancer."
Alice: "But you yourself smoke and drink a lot! You're wrong!"

The fact that Bob is a smoker and drinker doesn't mean that he is wrong about the effects of those habits. Still confused? A better rebuttal would be to accept the premise that alcohol and smoking really are cancer risks, but then ask why Bob continues to do them. Perhaps Bob knows full well about the dangers of such addictions, but he may or may not be a hedonist with no sense of self-preservation, or it's just because he cannot or is yet to break from his very own addiction, hence why he continues to do it. Or because he is consciously or unconsciously suicidal, which makes his self-harm a logical consequence. (Of course, if Bob mysteriously continues to survive and never even gets sick, Alice may have a point about his being wrong.)

Another example is how (former) drug addicts who have suffered for their drug usage can also be very well qualified in admonishing others to not get started in harmful, expensive, illegal, and addictive substances (sometimes even more so due to personal experience and physical proof of the damage incurred by the drug addiction). They may be challenged on this point only if they adopt a Holier Than Thou attitude and act as if they were never addicted at all, or make self-serving excuses ("I was manipulated by The Aggressive Drug Dealer, while you made the stupid decision to do drugs yourself.").

Bob: "This bill will be expensive and will not work, therefore you should vote against it."
Alice: "But you supported the bill last month!"

Now, simply pointing out a contradiction in someone's arguments is not a Tu Quoque. A fallacy must be a component of a logical argument, and it is not an argument unless a conclusion is drawn from the observed contradiction. Therefore, Tu Quoque only applies when it is argued the opponent's argument is wrong because it contradicts a previous position they've held. Once again, his reasoning might be unsound, but that does not affect the truth value of his premises. Bob's new argument is not invalidated by any previous position he may have held.

This can be particularly irritating if used in combination with a Strawman version of a previous position: the final nail in this particular coffin is usually Argumentum Ad Nauseam, demanding the opponent justify their current argument's alleged conflict with a position they never actually held, while refusing all attempts at clarification.

Two specific cases of Tu Quoque are Whataboutism, where a criticism of a group by an external critic is deflected with a claim that something the critic's group is associated with is just as bad or worse, and ergo decedo ("therefore leave") where it is suggested that a criticism of a group by an internal source shows the critic is either ignorant, treacherous or ungrateful, taking its name from the usual conclusion that if they are not happy with "the way we do things," they should leave the group. The latter is basically the No True Scotsman fallacy used offensively.

A closely-related fallacy to Ad Hominem, the "style over substance" fallacy is where the manner in which an argument is presented is held to affect the validity of that argument.

A common version is to dismiss an entire argument if the person making it uses bad language or insults, or sounds "too angry" — in essence, claiming that since their opponent cannot conduct themselves "politely," they obviously have nothing worthwhile to add to the discussion. Throwing someone out for breaking rules of conduct is not fallacious, but throwing their arguments out on this basis certainly is.

Alice: "No, Bob, it's fucked up that women at this job work the same hours for less pay and less opportunities. I've been here eight goddamn years and seen worse-qualified men get promoted above me. Like that brainless shit Andy, you know very well I have to do half his work for him and he gets all the credit. I prepared that presentation he got a bonus for!"
Bob: "You're just angry. I don't see any reason to take this seriously."

This is sometimes called a "tone" argument. When brought up on message boards, it's often called "tone trolling" if the post only complains of some other poster's "tone" without adding to a discussion. Since people are often passionate about things that affect them personally and cannot detach themselves from the associated feelings, this use of the fallacy is often summarized as "victory goes to whoever cares the least."

Another common variant is to disregard an argument presented in an allegedly incorrect manner; for example, because it is too long, too short, badly-spelled, badly punctuated, or uses poor grammar. Not making the effort to make a coherent, concise reply is certainly rude, but being rude is not the same as being wrong. This fallacy is quite common in internet discussions, and boils down to "You didn't present your argument the way I like, therefore it is wrong."

Note that saying "Your argument is presented poorly, therefore I will not read/listen to it," is not a logical fallacy, unless you also state that the argument they were making is false because of its poor presentation.

Yer mum 'ad all a them phalluses!