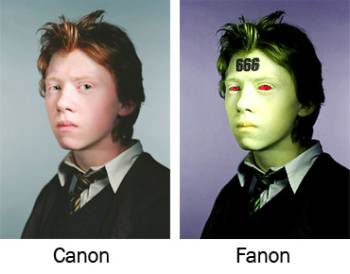 If it works for you, it works for me...note Not visible in the picture on right: The snake tongue, and (filed-off) red-horn-like growths above his ears
"Willy Wonka & the Chocolate Factory is a well-loved movie based on the wonderful book Charlie and Chocolate Factory. Parents love it, children love it, heck, we even love it. That does not mean it is perfect. Our goal is to expose the dark underbelly of the story. To reveal once and for all the truth about the only real villain in the movie (and no, it is not Slugworth). It is Grandpa Joe."
— The mission statement for the website, Say NO to Grandpa Joe: Exposing the truth

The fandom's tendency to shoehorn a good canon character into being a villain or make a villain significantly more evil than in canon is Ron the Death Eater, the inverse of Draco in Leather Pants. (The term usually used for this in fanfiction is "character bashing").

This demonization of a character can be seen as a kind of deliberate Flanderization — often, in creating Ron the Death Eater, the fandom spins his canonical non-evil actions into evil acts, uses canonical evil actions as a justification as to why they are irredeemably evil even if the canon says otherwise, and has every possible negative trait of the character exaggerated. A measure of ruthlessness becomes complete and utter sociopathy, a tendency towards holding grudges becomes an obsessive hatred of anything they dislike, slight denseness becomes raging stupidity, etc.

This is often the result of also having a Draco in Leather Pants, but it doesn't have to be — some characters inspire this sort of portrayal on their own, either through their canonical blunders, having some flaw that makes them Unintentionally Unsympathetic, or being an obstacle to the author's One True Pairing, especially if said character is a member of the Official Couple set. In any case, Ron the Death Eater is likely to be a Card-Carrying Villain who does things For the Evulz than to have any plausible reason for switching sides.

This trend may lead to the production of Fan Works that have other characters who are canonically friends of the victim act as though he or she has always been an object of justified loathing, rather than going the "shocked at betrayal" approach. Or, even if these characters end up siding with the Draco in Leather Pants, they are subject to some character defamation themselves by way of "I was stupid to love him and not you".

Unlike Draco in Leather Pants, this can also be intentionally done for comedy, usually of the black variety. In works relying on this much rarer reasoning, the character in question is turned into a Jerkass (or worse), but the other characters' relationships with them aren't changed much. That way the main characters are exposed to, and thus constantly made to suffer by, a villain, and good times are had by the audience.

Named for the tendency in Harry Potter fanfics where Draco Malfoy turns good and hooks up with Hermione (or Harry) to have Ron — in canon a decent, upstanding sort of fellow with a few faults but firmly on the side of good who happens to have a long-standing enmity with Draco — lose his mind (or have it lost for him) and often join Lord Voldemort just for a chance to kill the sainted Malfoy.

Compare Die for Our Ship or Derailing Love Interests (fans' or the creators' dissatisfaction with who the main character gets to be with romantically is the major cause of this trope), Designated Hero (the hero of a work coming off as not-so-heroic is the other major cause), The Scapegoat (when a character is blamed for an event they're not responsible for), Historical Villain Upgrade (when a work depicts a historical figure as worse than they were in real life), Dark Fic (a fan work that's deliberately Darker and Edgier than the original work and may involve characters being subjected to this trope), Rooting for the Empire (when the audience actually wants the bad guy(s) to win), Adaptational Jerkass (when an adaptation makes a character more of an asshole than they were in the original work), Adaptational Villainy (when an adaptation makes a character more evil than they were in the original work) and Face–Heel Turn (when the original source material itself turns a once good character evil). See also Accentuate the Negative, which this trope essentially does to fictional characters.

Contrast Draco in Leather Pants, where an evil or mean character is interpreted by fans as being a better person than they are in canon. Darker and often more serious counterpart to the Memetic Psychopath, who is always Played for Laughs.

And last but not least, head to Paint the Hero Black if you wish to join in the madness.