This page may contain unmarked spoilers for all previous Five Nights at Freddy's games. You Have Been Warned! 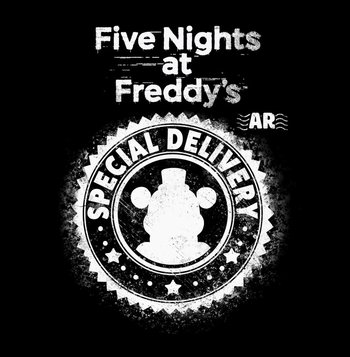 Are you ready for a visit from Freddy?
"I hope you enjoy my visit; I've got a special delivery just for you."
— Freddy Fazbear
Advertisement:

Congratulations on becoming an official member of the Fazbear Funtime Service plan! Are you feeling lonely? Do you need some entertainment in your life? Well thanks to Fazbear Entertainment, you'll never have to worry about being alone again! Under this program, our state-of-the-art animatronic performers will be delivered directly to your home, providing you with an unlimited amount of fun-fun-fun excitement! There is nowhere you can hide... from all the good times you are about to have with Freddy and his friends, that is!

Now, no new system is without the occasional glitch, and even a system as excellent as this one is no exception. In the interest of legal culpability, we are required to disclose that we have been getting some reports of our animatronic performers malfunctioning, with some even attacking customers rather than entertaining them. But fear not! Your phone has been equipped with a controlled shock delivery system to neutralize any animatronics that should happen to experience this freak one-in-a-million error, meaning there is absolutely nothing to worry about!

Have fun, and remember, we're always watching out for you!

Five Nights at Freddy's AR: Special Delivery is an augmented reality smartphone game created by Scott Cawthon and Illumix; it is the eighth main series game in the Five Nights at Freddy's series and the tenth overall. As its name suggests, the game utilizes Augmented Reality in a similar style to something like Pokémon GO to create the impression of the action taking place within your own housenote or wherever you happen to be playing the game. The player must use their phone to detect invisible animatronics, reveal them, and stun them with an electric shock in order to protect themselves and gather parts; they can also customize their own animatronics to send to their friends and gather parts, as well as engage in minigames to collect Remnant to upgrade said animatronics.