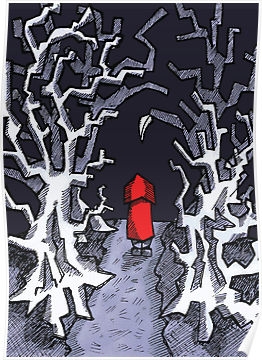 "You were too easy to spot with that hood on your head —
Why don't you just wear a target instead?
It was almost too easy, should not be allowed —
If only you hadn't stood out from the crowd!"
— The Wolf mocking Red Riding Hood before attempting to devour her in Red: The Red Riding Hood Musical
Advertisement:

Attention, Parents: For God's sake, do not dress your tiny daughters in red. Particularly not red coats. Particularly if the daughters are blondes. Awful, awful things will happen.

Often, this is clearly an intentional invocation of Little Red Riding Hood, signalling an innocent heading into danger. It is a very popular element of Grimmified works. To increase the association with the fairy tale, the red garment is often a coat, a cape, or something with a hood.

Red is, of course, the color of blood, and as such it carries ancient associations with sexuality (as in Lady in Red) and danger (as in Red Shirt). It is also simply a very strong, eye-catching color. Anyone wearing head-to-toe red is marked out, highly visible and memorable — not only to the audience but also to anyone who may wish to harm her. When that person is a little girl, she is bound to seem especially exposed and vulnerable.

This is Older Than Steam, considering that some of the older endings for Little Red Riding Hood really do end with the wolf killing and eating her, notably the 1697 Charles Perrault telling that predates the more popular (and less grim) Grimm Brothers version. The Perrault retelling seems much more aimed at older Red Riding Hood, and the "wolf" is really a man that will charm her pants off(literally) and leave her in a bad spot. A terrible fate in 1697. Its ending "As you're pretty so be wise- a wolf may lurk in any guise." (Ironically, another early version of the story where the protagonist survives was one written in 1890 by Andrew Lang called "The True History of Little Goldenhood". As the name suggests, she does not wear red at all, and what makes it ironic is, she is saved by the golden hood itself, which is enchanted. Lang's narration explicitly states that the earlier story had been mistold.)

It can be considered an Always Female version of Bring My Red Jacket. Dressing all in white is often a dangerous choice for girls and women, too. Contrast Little Red Fighting Hood, where the blood and danger associations are meant for her enemies.

NOTE: In Asian mythology, especially for the Chinese, this trope is enforced because of the common belief that red symbolizes revenge. Its not uncommon for girls who committed suicide from heartbreak due to their cheating boyfriends or spouses to be all clad in red, which will curse those who break their hearts to suffer after their demise.