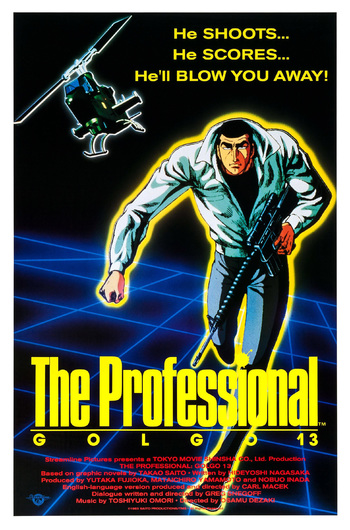 He never kills for sport. He never misses the mark. And he never gets involved.
Advertisement:

Golgo 13: The Professional, known as simply Golgo 13 in Japan, is a Japanese animated film adaptation of the Golgo 13 franchise released on May 28, 1983 by Tokyo Movie Shinsha. It is the first animated film to be based on the manga and the third film overall. Merciless contract killer Duke Togo — codenamed "Golgo 13" — is hired to assassinate Robert Dawson, the son of oil baron Leonard Dawson and the heir of Dawson Enterprises, and succeeds.

Later, after accomplishing a hit on a powerful crime boss in Sicily, Golgo is suddenly attacked by the U.S. military and discovers that his informant has been killed by Snake, a genetically altered assassin. Aided by the U.S. Army, the FBI, and the CIA, Dawson has become determined to kill Golgo and avenge his son's death.

It was followed by a sequel in the OVA, Queen Bee.

In The Professional, Cindy says his name out loud as Duke found out who Dr. Z 'really' is before killing his target.

In The Professional, Cindy says his name out loud as Duke found out who Dr. Z 'really' is before killing his target.