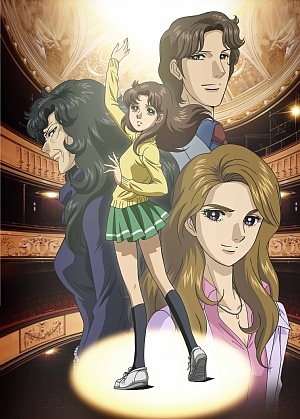 Tsukikage, Maya, Masumi and Ayumi
"When we act, we wear a very fragile, easily broken, glass-like mask. No matter how well we perform the role, no matter how excellent our acting is, if our mask is broken... our real face is exposed.
—Rei Aoki
Advertisement:

Maya Kitajima is an Ordinary High-School Student who sees herself as plain-looking, boring, clumsy and good for nothing. After getting a small part in a school play, she discovers a love for acting, largely because it allows to become someone else. In the face of opposition from her mother, she runs away from home to take up a scholarship offer to an acting school in order to follow her dream.

Maya's potential for acting is noticed by former actress Chigusa Tsukikage. Before an accident on stage that left her heavily scarred and with ongoing health problems, she was considered the top theatrical actress in Japan, if not the world. She owns the rights to a legendary masterpiece play, "Kurenai Tenyou" (The Crimson Goddess). The playwright considered the title role so difficult that Chigusa Tsukikage was the only actress capable of performing it, and gave her full rights to the play.

Since her injury over 20 years ago, Tsukikage has been teaching acting, while searching for an actress to take up the role and resurrect the play. The play hasn't been performed during that time, since Tsukikage is such a perfectionist that no-one has been able to live up to her standards. She sees potential in Maya, and thinks the time to resurrect the play may come soon. Especially since she's finally found a girl just as obsessed (one character describes it, justifiably, as "pathologically" so) with acting as she is... However, Maya is not the only young actress Chigusa has her eye on: there's also Ayumi Himekawa, daughter of a famous director and a top actress. Ayumi is beautiful, graceful, and has been acting professionally since she was 5. She's got everything Maya doesn't have, but they share a love of acting. Not to mention, Ayumi also wants to succeed on her own, refusing her parents' help, to prove to everyone that she's not a Daddy's Girl...

During the play's original run, it played to over 300 packed houses. The major theatrical companies aren't about to sit back and let that kind of profit potential go to another company. Some of them will stop at nothing to get their hands on the rights, but Tsukikage isn't about to hand it over.

This series started as a manga in 1976, and is considered one of the classics of Shoujo manga. It's been turned into three anime series (two for TV and an OAV series), a theatrical play, a drama, and even a Noh play. The ending of the series is still open, with the mangaka, Suzue Miuchi, only recently returning to begin wrapping up the series. The 1984 anime TV series (directed by Gisaburo Sugii, who is primarily known as a renowned director of anime feature films) is known in France as "Laura ou la passion du Théâtre" and in Italy as "Il grande sogno di Maya"; it's also been dubbed in Spanish as "Quiero ser actriz" ("I want to be an actress") and aired under that title in Venezuela. Very popular in Europe.

The 2005 TV series was licensed by Sentai Filmworks, but only the first half of the series was released, with the company admitting they were not releasing the rest of the series due to extremely poor sales.

The series is highly influential and has been running for 30 years with no end in sight. Being an older shojo series, Glass Mask is extremely tropalicious (even without considering the content of the various plays that happen throughout the story) and the manga suffers from quite an extreme case of "Seinfeld" Is Unfunny. Many of today's shoujo tropes were developed by Glass Mask, and it was the hundreds of shoujo that came after which played out the tropes until they became cliches. Some newer readers may think that the art is ugly or strange, but this is more of an issue with taste, since they may be unused to pre-1990s styles and Glass Mask is often considered as having one of the best vintage shoujo styles.

Due to Glass Mask's age and fame, it is often referenced in various other media, many with similar themes such as Star Project, to works without any similarity at all, like YuruYuri. It is often the animanga that other animanga talk about. However, the series never reached American shores. It is often considered an obscure manga in America unlike the popularity it enjoys in its native Japan and Europe, and so these references tend to fly over the heads of American audiences.

In 2018, the original 1984 anime was finally released for streaming on HIDive.