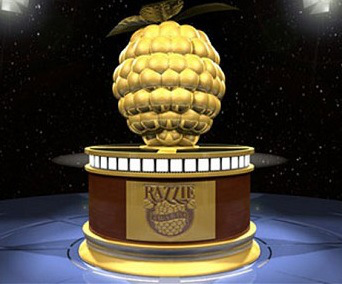 The Golden Raspberry Awards (and by "raspberry" we mean the big, loud, wet one), often shortened to the "Razzies", is an award ceremony in recognition of the worst in film; when you've made a movie that is uniquely terrible, this is exactly the sort of "award" you may be in for.

Created by John J.B. Wilson (a film marketing professional who viewed hundreds of films a year as part of his job), whom staff of the Razzies refer to as "Ye Olde Head Razzberry", and Maureen "Mo" Murphy, the Razzies have been handed out since 1981, traditionally on the evening before the Academy Awards are handed out. The voters are average filmgoers who pay an annual membership fee to be part of the Golden Raspberry organization.

Understandably, very few people ever show up in person to accept their Razzie, a gold-painted plastic statue costing "about $4.97". A few have, though, taking the suckitude of their movie in stride (which makes you wonder). A larger number of "winners", while not attending the ceremony itself (traditionally held the day before the Oscars, which is understandably a pretty busy weekend in Hollywood) have accepted their awards at other venues, including a number of late-night talk shows. In more recent years, several "winners" have arranged to receive the awards by special delivery and have delivered belated "acceptance speeches" upon their receipt. A few actors and films have won both Oscars and Razzies, while a select few have been nominated for both awards for the same work.

There have, however, been criticisms of the Razzies' process. As Sandra Bullock pointed out when accepting her award for All About Steve, many Razzie voters don't even see the films they're nominating, instead choosing to hate on films just because they're popular to hate on, or at least were (as seen as with films such as the Twilight franchise or the Star Wars prequel trilogynote Pre-Vindicated by History) or star somebody who has a rabid hatedom (as with Private Parts and Barney's Great Adventure). Along with some now-critically acclaimed films being nominated for Razzies such as The Shining in 1980, Heaven's Gate in 1981, The Thing in 1982, Scarface in 1983, and The Hunchback of Notre Dame in 1996, it's easy to see where some of the backlash lies. And even then some critically-acclaimed films did receive Razzies regardless of their reception, such as Wall Street in 1987. It's also quite clear that Wilson's own nitpicky tastes guide a lot of the selection process; Brian De Palma has gotten five Worst Director nominations for seemingly no reason other than Wilson not liking him. There is also criticism towards the "Worst Actor" categories, since an actor/actress usually gets nominated for being in a bad film in the first place, regardless of their actual acting skill in a film. The backlash is also probably why the Worst New Star, Worst Original Song and Worst Musical Score (and considering the fact that nominees and "winners" for the latter two were often rap songs or scores performed with synths or guitars instead of a orchestra reeks of New Media Are Evil) awards were discontinued.

Entering their fifth decade, the Awards hold an odd position in the movie world. The annual nominations will usually include choices that infuriate both serious cinephiles and more casual movie fans, and the irreverent tone of the Awards clashes with modern American cultural sensibilities that value respect, dignity and sensitivity. Nevertheless, the Awards still go on, getting a surprising amount of media coverage tied to the Oscars, even if many people feel like it's become the epitome of an Overly Long Gag. The Golden Raspberry organization has tried to respond to accusations of bullying and mean-spiritedness by claiming that that the whole ceremony "encourages filmmakers to own their bad", asking winners to "embrace" their awards. This is to the point where a user named Mjanm1 (who was probably a Golden Raspberry Award Foundation staffer) edited the ceremony's page on The Other Wiki and changed several sections to make them appear far more positive, even going as far as to change the introduction to hide the actual motive of the Razzies - ridiculing movies based on other critics' or incredibly vocal hatedoms' opinions. There have also been accusations of racism and sexism when it comes to frequent targets of the Razzies. It doesn't help that John J.B. Wilson himself is somewhat of a recluse and doesn't discuss his own views on what exactly the purpose of the Razzies should be in today's world. Wilson and Murphy, despite selling memberships of the Golden Raspberry Award Foundation to any interested parties, continue to exercise effectively dictatorial control over the organization, with a 2022 decision to rescind both an award handed out the previous week and a decades-old nomination in one fell swoop appearing to take place without any oversight by the membership.

In 2005, Wilson published The Official Razzie Movie Guide, which was not a simple book on the awards, but a compilation of So Bad, It's Good movies, usually high on the unintentional comedy scale, preferring to extensively cover films released in the decades before the awards began (less than half of the 100 movies were Razzie nominees).

Starting with the 2015 awards, a new category, the Razzie Redeemer Award, has been handed out to a past nominee or "winner" who has moved onto a more critically successful movie.

Remember, it's just a movie...

You can find a list of winners of the various Razzie categories here.