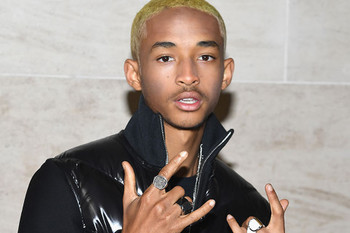 I am just an icon living.
"The world is going to keep bashing me for whatever I do, and I'm going to keep not caring."
Advertisement:

Jaden Christopher Syre Smith (born July 8, 1998) is an American singer-songwriter and actor. He is the son of Will and Jada Pinkett Smith and older brother of Willow Smith.

He made his acting debut in The Pursuit of Happyness in 2006, where he starred along with his father. He would go on to appear in several more films, but after the flop of After Earth, he decided to focus on music, dropping several mixtapes before releasing his debut album in 2017.

For a while, he was also well-known on Twitter for his strange, cryptic tweets.