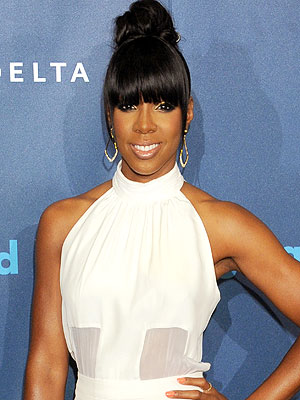 Kelly Rowland (born Kelendria Trene Rowland, February 11, 1981 in Atlanta, Georgia) , is an American singer, actress, model, and TV personality. She started her career as one third of the girl group Destiny's Child, before embarking on her own solo career in 2002.
Advertisement:

Rowland scored her first major hit with international smash single "Dilemma" alongside rapper Nelly. Since then, she has managed a string of hits and song features that have kept her recording career buzzing, and earned her a sizable fan base (especially amongst the international music crowd). Rowland has maintained a viable TV presence as a former celebrity judge for both the UK and US X-Factors, and starring in such movies as Freddy Vs. Jason, and The Seat Filler''. Throughout a career spanning 16 years, Rowland has sold over 25 million albums as a solo artist, in addition to over 60 millions albums with Destiny's Child.

Rowland performed alongside former band mates Michelle Williams and Beyoncé at the latter's 2013 Super Bowl halftime show. She also has made headlines for the domestic abuse she suffered from an unknown boyfriend, and her stunning honesty over her initial envy of former band mate Beyoncé's successful solo career on the song "Dirty Laundry", taken from her Talk a Good Game album.