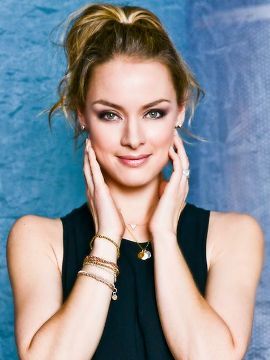 Rachel Alice Marie Skarsten (born April 23, 1985 in Toronto, Ontario) is a Canadian actress best known for her role as Dinah Lance/Redmond on the television series Birds of Prey (2002), Tamsin in Lost Girl, Elizabeth I of England in Reign and Alice in Batwoman.

Prior to her acting career, Skarsten was a dancer and athlete.

She's also popular with the LGBT Fanbase due to her characters being prone to Les Yay (sometimes coupled with Foe Yay).

Filmography note works listed are those with TV Tropes pages only