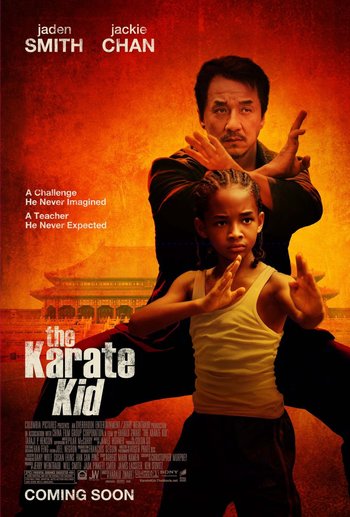 A Continuity Reboot of The Karate Kid series that premiered in June 2010, borrowing elements of the first one but set in Beijing, China. Jaden Smith (Will Smith's son) plays the lead role of Andre "Dre" Parker and Jackie Chan is the old mentor, Mr. Han. There is almost no karate in this film; the lead character trains in kung fu instead.

Sits outside the main Canon of The Karate Kid Franchise.note Although there's nothing in the film that contradicts or even references the main canon of the series (outside of Jackie Chan being name-dropped in Cobra Kai), so it's really up to you to decide.

The Karate Kid contains examples of: