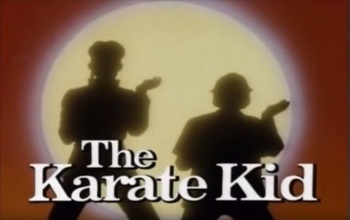 In the 1989 series, Miyagi (Robert Ito) and Daniel (Joey Dedio) continue their adventures when a magic shrine is stolen from a Japanese temple. Along for the ride is Taki (Janice Kawaye), a temple girl. It follows them from place to place as they hunt the shrine and help the natives.
Advertisement:

While its decent animation pleased fans of the film the series is based on, NBC screwed the series and canceled it after only thirteen episodes due to low ratings. Fortunately, Sony has made the entire series available on iTunes and has been streamed on Netflix, Hulu, Crackle, and Tubi.