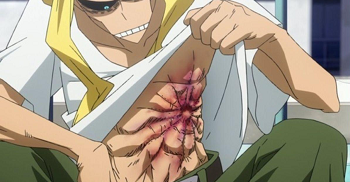 Everyone gets hurt sometimes, but not everyone wants others to know it. Maybe it's because they'll be doted on and fussed over. Maybe it's because they'll be scolded for getting hurt if it was caused by them being careless or clumsy. Maybe the person who finds out will raise Hell if the injuries were caused by another person. Maybe it's that they don't want them to be treated, likely due to a fear of doctors or hospitals. Whatever the reason, they need to keep it a secret. However, their injury is in a location that would make it highly visible to others. There must be a way to hide their injuries without anyone knowing...
Advertisement:

Clothing-Concealed Injury is when a character uses a piece of clothing to keep their wounds or scars a secret from others. This is often done with sunglasses to hide black-eyes, scarves to hide neck injuries or long shirts or pants to hide wounds on arms or legs. Makeup also gets used for concealment purposes, usually to cover up cuts or bruises on the face. Technically, an Eye Patch is this, but it's such a specific article of clothing that's not worn otherwise, so people know it's usually covering up some sort of Eye Scream. Occasionally, this clothing is something that the character usually doesn't wear or is not suitable for the current situation or weather, such as wearing scarves and jackets when it's warm out, making other characters suspicious. The character will sometimes make strange excuses as to why they are wearing these clothes, which will raise further suspicion.

Inevitably, the injuries will end up getting revealed, either by accident, force or by willingness of the character (depending on the situation). The character will then be scolded for not telling anyone that they were hurt, which may lead to An Aesop being delivered about why you shouldn't hide injuries from others.

A supertrope to Secret Stab Wound and Hiding the Handicap. Can overlap with Revealing Cover Up if wearing a certain piece of clothing makes it obvious that a character is hiding something. Often occurs with people who have done Self-Harm, have been in some kind of fight, or are a victim of Domestic Abuse. Bring My Red Jacket (and, humorously, Bring My Brown Pants) are related tropes wherein a character anticipates the future need to conceal an injury. May be one reason a character wears Conspicuous Gloves. Contrast Cut Himself Shaving where the injuries are visible, but the reason is concealed with an excuse.