Dragons Up the Yin Yang 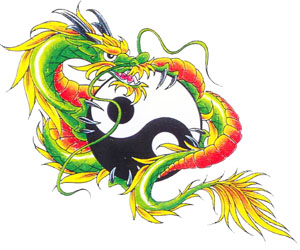 In a visual work that features East Asian mysticism or cinematic martial arts, the odds are very good that there will be a gratuitous appearance of either the taijitu (known in the west as the "yin-yang" symbol) or an Eastern dragon (either a Chinese lóng or a Japanese tatsu) somewhere. Whether it's a rare artifact, a wall-sized scroll hanging in the temple, or a design on the sensei's (or shifu's) robes, the presence of either or both of these elements serve to remind the audience that Awesome Eastern Stuff™ happens here.

Typically, the dragon is used to indicate badassery while the taijitu indicates mysticism, but many works will wantonly use either or both just for atmosphere. Particularly inane is the depiction of these dragons breathing fire, as most Eastern dragons were water spirits.note They were river guardians, rain gods, and a few lived in wells. The four most powerful dragons in Chinese mythology are the Ocean Lords of the Eastern, Southern, Western, and Northern seas. Bonus points if there is an image of a dragon curling around a yin-yang.

For the most part, resemblance to Real Life varies: most Thai and Vietnamese temples are more likely to feature icons of the various Buddhas instead, but Chinese temples may really have dragon reliefs sculpted into the wall, pillars and/or the roof and/or a small taijitu scuplted at the top of the main entrance. This is because the taijitu originated from Taoism - a completely separate religion from Buddhism (though when Buddhism reached China the two were often mixed together) that isn't as widely embraced by Thai or Vietnamese culture, but is widely embraced in Far East Asia. Depending on area, most Asian city folks may go for days without seeing either symbols, and the only dragon one might find in most martial arts schools will be a Bruce Lee poster in a corner. Other Asians may see it daily due to the presence of an altar in the home.

On the other hand, there's also a bit of Truth in Television involved: the taijitu is a symbol rooted in Asian philosophy and religion, and Eastern dragons are traditional symbols of power and strength. But these two symbols quickly become overused due to Small Reference Pools, hence the trope. It'd be a bit like if a Chinese film studio created a movie set in America that slapped around eagle iconography every ten feet.

Also see Eastern Zodiac, National Stereotypes, Everybody Was Kung-Fu Fighting, and Our Dragons Are Different. Add in a tiger, and you get fun times.

Alternative Title(s): Dragons Up The Taijitu