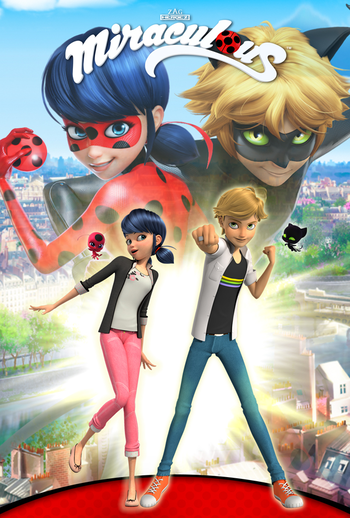 Mais ouiTranslation Why yes, they're just two typical Parisian teenagers!
"In the daytime, I'm Marinette,
Just a normal girl with a normal life.
But there's something about me that no one knows yet,
'Cause I have a secret..."
— Marinette Dupain-Cheng, in the show's Opening Narration
Advertisement:

Miraculous: Tales of Ladybug & Cat Noir (Miraculous or Miraculous Ladybug for short) is a 3D-animated Magical Girl/Superhero joint effort by France's Zagtoon and Method Animation Studios with Toei Animation of Japan and SAMG Animation of South Korea. It premiered in France and Belgium in October 2015, and in EBS in Korea on September 1, 2015.

The story is about Marinette Dupain-Cheng, a junior high school girl living in Paris. Using a pair of earrings and the magic of her Fairy Companion Tikki, she has the power to become the superheroine Ladybug. Joining in her adventures is a black-clothed Cat Boy named Cat Noir, whose secret identity happens to be Adrien Agreste, Marinette's crush. Like Ladybug, he gains his power from his companion Plagg. Neither are aware of each other's identity, and thus proves to be a challenge for them. Ladybug and Cat Noir are pursued by the villainous Hawk Moth, who seeks to gather the Miraculous...es for his own sinister purposes. To this end, he corrupts the ordinary citizens of Paris with his akuma, turning them into supervillains to do his bidding, and it's up to the two to keep their powers from falling into the wrong hands and to protect Paris from the various evil forces.

The animated series has gained attention for its well-animated fight scenes, comedic characters

Check out Zagtoon's page for the show here

In the United States, the series first premiered on Nickelodeon on December 6, 2015, followed by reruns on KidsClick starting July 3rd, 2017, and new episodes are now seen on Netflix beginning with the second season in 2018. In the United Kingdom and Latin America, the series premiered on Disney Channel; the UK premiere was on January 30 and the LA premiere was in May, 2016.

for Netflix in U.S. Shortly after KidsClick shut down, Disney decided to pick up the rights to the show in the US, and the first season premiered on Disney Channel on April 8, 2019.

There are two series of webisodes. One is titled Miraculous Secrets, and the other, animated in 2D, is Tales from Paris. They are available on the official YouTube channel

or (for those who know French) on TF1's website

Reader, here is the Miraculous of the Troper, which grants the power of lampshade hanging. You will use it only for the greater good. Once the job is done, you will return the Miraculous to us. Can we trust you?

Example of:
Capture and Replicate