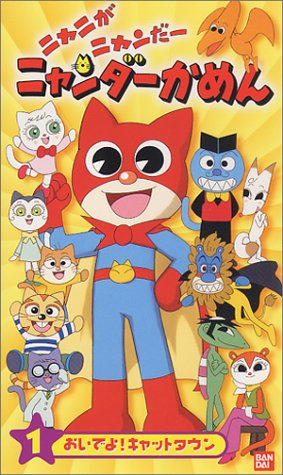 Mighty Cat Masked Niyandar (ニャニがニャンだー ニャンダーかめん), or often known as Nyanda Kamen is a children's anime series which aired from February 2000 to September 2001 in Japan. The series is about Nyago-Chan, who takes up the superhero identity of Mighty Cat Masked Niyander, the protector of his hometown Cat Town. So it's Shazam! with talking animals.

If the artstyle looks familiar to you, the series was created by Takashi Yanase, who also did Anpanman. Like Anpanman, it was written as a series of books in the late 1990s, which spanned into the anime.

Sadly, unlike its parent series, it only lasted for about 83 episodes. It gained a cult following when episodes are uploaded online years later.