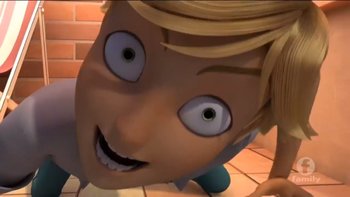 "Marineeeette! The prettiest and smartest one of all is Chloééééé!"
Advertisement:

Miraculous Ladybug may be one of the last western cartoons you should be scared by, but make no mistake, it is not completely removed from any horror whatsoever, as it's fully committed to descending into nightmare-inducing depths that not even Code Lyoko would be allowed to go. And considering that one of its production companies is known for taking anime to frightening new heights, it's a miracle that this show somehow got to air on TV.

"World: Shanghai - The Legend of Ladydragon"