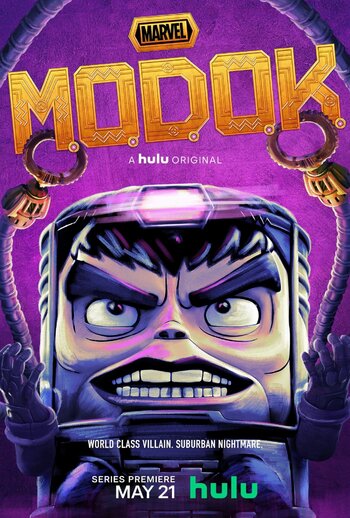 The Mental Organism himself.
Time to change the world...BY BRINGING IT TO ITS KNEES!
— M.O.D.O.K.
Advertisement:

M.O.D.O.K. (also called Marvel's M.O.D.O.K.) is a 2021 Hulu Stop Motion adult animated show that premiered on May 21, 2021. It was created by Jordan Blum (American Dad!) and Patton Oswalt and stars Oswalt as the Mental Organism Designed Only for Killing. The show is a collaboration between Marvel Studios, Marvel Television, Marvel Animation, and Stoopid Buddy Studios.

George Tarleton / M.O.D.O.K. has been the head of A.I.M. for a while now and things aren't going so well. In fact, they are bankrupt and have to be sold off to G.R.U.M.B.L. Challenged for leadership of A.I.M. by Monica Rappaccini (Wendi McLendon-Covey), things aren't looking any better at home either: M.O.D.O.K.'s wife Jodie (Aimee Garcia) is questioning whether her husband even needs to be a supervillain, while their children Lou (Ben Schwartz) and Melissa (Melissa Fumero) struggle with being a supervillain's children as well as normal high school problems.

But M.O.D.O.K. can fix all of that. He can fix everything. Except...probably not a mid-life crisis.

by Hulu months after its first season concluded.